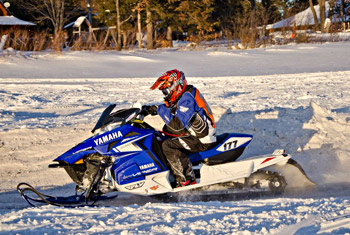 The eyes of the world were honed in on the slopes of Aspen, Colorado this past weekend, as Winter X Games 2014 brought together the best extreme athletes in the world for a competition only rivaled by the Olympics.

Amongst them was adaptive snocross athlete and motocross legend Doug Henry.

With special modification made to his Yamaha SR Viper RTX snowmobile, Doug rallied late in the final to pass Jim Wazny and earn the bronze medal at the line.

The medal certainly wasn’t a first for the long-time Yamaha athlete who is perhaps best known for being the rider to first win an outdoor national motocross championship in 1998 aboard a Yamaha YZ400F. The bronze marked Doug’s sixth medal in X Games competition, with four coming from Winter X and two more at Summer X.

While many of the world’s top snowmobile racers were at Winter X, several Yamaha independent riders were battling the elements in Hayward, Wisconsin in round two action of the COR Powersports cross-country series. The regional series is known for its demanding natural terrain courses, and Hayward proved to be all that and more, as sub-zero temperatures and wind gust in excess of 30-mph further challenged racers.

Highlights from the weekend include a strong showing from Pro Women’s racer Sarah Wiedmeyer, who captured the win in Women’s, a second in the Trail class, and a third overall in Vet 30. Matching Sarah’s efforts was last year’s rookie of the year Mitch Sebastian, who grabbed a pair of second place runs in Junior 16-17 and the 85 classes with his Phazer. Mitch also joined his father to snag another second place finish in the Team class aboard a Yamaha SR Viper.

Other Yamaha racers with strong showings included: a fourth place finish by Justin Steck in Pro Open; a second place run by Dusty Bodine in Sport Stock; and a fifth place in Vet30 by Seth Thorson.

Up next is the legendary Soo I-500, where Yamaha is one of the favorites to win it all.