WHAT IF THE FUTURE MEANT LESS ENGINE CHOICES? 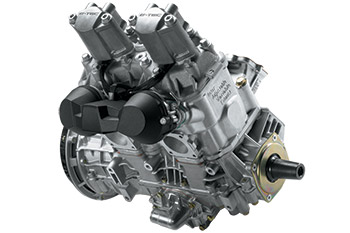 In the automobile business there is much talk about limiting the number of engine suppliers worldwide. The conversation revolves around the astronomical costs of producing an engine and getting it certified clean. Some OEM car and truck companies put the cost of developing and tooling a new engine in the billion-dollar range.

We think that pricing sounds way steep considering what the powersport business spends per engine to build some pretty sophisticated stuff – however, everyone knows auto companies can outspend just about any other medium when it comes to research and development. Nuff said.

Sound too weird to be true? Think about this: Shared development costs, shared tooling and even shared patents would save the industry a ton – and who knows where the EPA could be going in the next decade? Development costs could go through the roof!

Would it mean some snowmobile companies would no longer be developing and manufacturing any engines? We think it could work this way: Each of the four OEMs would be building at least one specific engine for each snowmobiling segment or displacement category. It’s common knowledge all four have engine plants and it would simplify things considerably to be focusing development and R&D on only one or two different mills.

Can you imagine a Ski-Doo with a Yamaha 4-stroke triple – or how about a Polaris with an E-TEC? Sounds almost blasphemous, doesn’t it? Tell us what you think.

Kent Lester
Kent Lester is Co-Publisher of SUPERTRAX Magazine and a regular contributor to this website.
Previous article5 REASONS TO ENTER NORTH AMERICA’S TOP SNOWMOBILER CONTEST
Next articleMORE POWERFUL 2-STROKES ON THE HORIZON