MORE POWERFUL 2-STROKES ON THE HORIZON 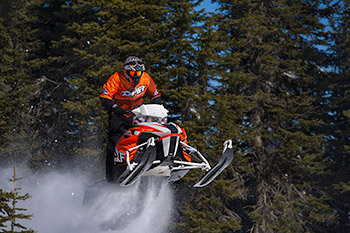 It’s interesting how the maximum displacement for 2-strokes has peaked at 800ccs.

There was a time when some OEMs were building 1000cc 2-strokes (Cat & Ski-Doo) but those times have passed and the 800cc maximum has been in place for a long time.

It’s subtle but you may not have noticed that the OEMs have been focusing on other things besides engine performance to sell their new line-ups every year. Concentration on chassis lightness, handling, electronics and shock innovation has really improved the breed – but is it enough to keep the power-hungry masses at bay?

Polaris tipped the scales when it introduced the super-light AXYS last year with a very hot new 800 HO under its hood and now Cat has come with new TEAM clutches on its somewhat aged but historically fast throttle body-EFI 800. We think the 2016 Cat 800 could be quick – especially considering the company has had a whole year to benchmark Polaris’s performance.

Where does this leave Ski-Doo? We won’t know until we ride the 2016 production Doos this winter, but it looks like the company is going to have to up its ante in the 800 performance game. They may have already done it but if E-TEC direct-injection technology limits the company’s ability to wring more Sea Biscuits out of the 800R, a new game plan will be needed – pronto.

We think a valid solution would be to raise the displacement of the top-line E-TEC to 850ccs. Since any engine modification program would require jumping through EPA hoops anyway, why not just make the engine bigger? An extra 50ccs would increase torque and power and really set the Ski-Doo armada on its head. You guys know you’d just have to upgrade, don’t you!

Here’s another twist: We strongly suspect Cat is coming with a new C-TEC2 Dual Stage Injection 800-class engine soon. What if it was an 850? Whoa! Back to the drawing boards everyone.

Kent Lester
Kent Lester is Co-Publisher of SUPERTRAX Magazine and a regular contributor to this website.
Previous articleWHAT IF THE FUTURE MEANT LESS ENGINE CHOICES?
Next article30% Savings on 2016 Ontario Trail Permit