WHAT DOES THE FUTURE HOLD FOR YAMAHA? 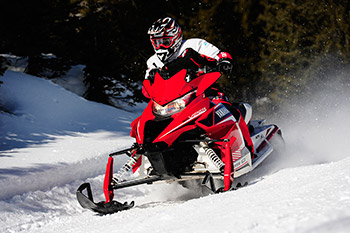 Our readers and viewers have been asking us why Yamaha invested in dramatic 2016 changes, especially to the Vector but also to the Apex.

Just to update you, both the Vector and the Apex have an all-new coupled, single shock skidframe this year called the Singleshot. Depending on its length (it’s available in both 129 and 146-inch versions), the SingleShot skidframe weighs as much as ten pounds less than the former Monoshock setup.

We’ve sampled it and believe us, there’s been absolutely zero compromise in ride quality and the Singleshot, even in its 46-inch iteration, turns on a dime – actually a lot better than the former 144 on the Apex.

Although the weight drop isn’t immediately evident from the drivers seat, every ounce pared from this platform is bound to make a difference. As it is, we think the overall riding experience with both sleds has been enhanced compared to former versions.

The question remains however, why invest in these two sleds when Viper sales (same displacement triple as the Vector) are so strong? We’re not sure either but we’re guessing Yamaha has more in store for its own product lines and consumer testing SingleShot may mean the skid will find its way onto the Viper platform in the future.

Using YCCT on the Viper is just a no-brainer and the system works so well we can’t help be excited about the prospect. We’re wondering if the next generation of Yamaha-Arctic Cats may use the new skid, perhaps in an all-new super-light platform that clearly defines the line between the two companies.

Kent Lester
Kent Lester is Co-Publisher of SUPERTRAX Magazine and a regular contributor to this website.
Previous articleBRP FREE AVALANCHE AWARENESS SEMINARS
Next articleNOMINATE YOURSELF AND WIN A 2017 SKI-DOO SLED!