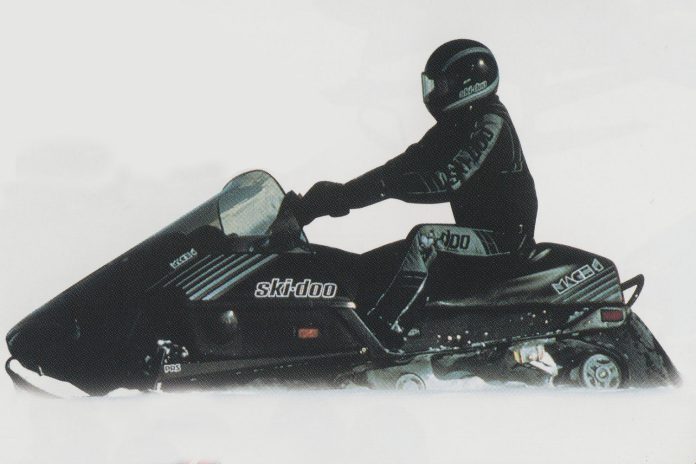 Through the mid 1980’s Ski-Doo had been largely relegated to the back row of the high performance snowmobile market without a big bore, multi-cylinder response to the ridiculously popular Indy 600 and 650 triples and the Wildcat 650.

The hype surrounding the intro of what was billed as the answer to Minnesota’s dominance of the market was this sled: The 1989 583cc Rotax twin powered Mach 1.

Let’s get something straight about this painful story – the Rotax 583 was not the problem – but rather the chassis, and in particular, Ski-Doo’s second-only foray into the world of involute track drive (only the Citation LS 250 utility sled had involute drive at this time).

Some kind of “us versus them” disagreement between the accountants and the engineers in the design of the involute drive skid left the Mach 1 with so much track friction the sled would literally “nose-over” like you pulled the chute at 90 per.

The angle of attack on the Mach 1’s slide rails was so abrupt, track friction was creating parasitic drag on the scale of a scalp lice infection.

The really tough part for Ski-Doo during the Mach 1 fiasco was the large number of units that had been pre-sold for MY 89.

Expectations of the yellow faithful were high when they lined up expecting to tow their bud’s Indy 650 down Kevlar Lake. Instead, the Mach 1 in its first iteration, was unable to beat an Indy 500.

I remember the ultimate insult from a friend who had just blown past the Mach 1 I’d been riding with his Indy 500. He said: “Hey, there’s nothing really wrong with that sled – except the advertising”. Doh!

The next two years, Ski-doo made changes to the track and skidframe and performance improved commensurately.

Supertrax Onlinehttps://www.supertraxmag.com
Check back frequently for new content and follow us on social media!
Previous articleFull Test Ride of The 2020 Polaris Indy XC 137
Next articleUNDER-ACHIEVERS FROM THE PAST: 1980 YAMAHA SS440