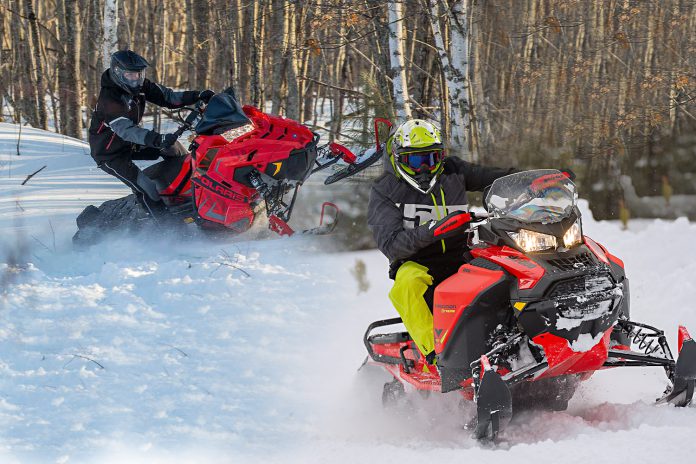 I’m truly intrigued with the opportunity to compare two of our 2020 Press Fleet rides as soon as they arrive here at Supertrax/Snowtrax World HQ.

You’re wondering what two sleds are intriguing enough for me to bother writing this column, right?

These two rides are very comparable and represent the emergence of a new segment, the Utility/Sport genre.

It’s no secret when Polaris introduced the Titan two years ago, Ski-Doo became ferociously protective of its sole ownership of the segment. Until then, Ski-Doo had had the only entry in the class with the former Expedition 800 E-TEC – a re-branded Lynx built in Finland. Enter the Ski-Doo G4-based Expedition 850 E-TEC Xtreme.

The Polaris Titan is a formidable snowmobile that can provide any recreational snowmobiler both trail performance and deep snow fun while being fully capable of towing an ice fish hut down the lake.

We’ve been saying this since the Titan arrived and I’ll say it again here – today’s snowmobilers want snowmobiles that can do more than one thing.

The Titan heightened this awareness and delivered a multi-purpose snowmobile that required no excuses and little compromise. The Titan is fast down the lake and fun to trail-ride all day.

One thing it is especially good at is keeping the rider warm – even with the sporty low XC windshield. Another thing the Titan does with near unequalled prowess is haul two people and a plethora of touring gear in real comfort.

The Ski-Doo Expedition Xtreme is an equally impressive ride. The Double XX can satisfy the demands of both performance trail and off-trail riders as well as utility users.

Make no mistake about this – under its hood there’s fire-breathing 160-plus horsepower Rotax E-TEC 850 twin and it can capably propel the XX to heroic velocities.

Top speed is in the 140 to low 150 km range (85 to 90 mph) and the sled can easily achieve those velocities with two riders aboard.

Frankly, we’re wondering at this point if the Grand Touring will continue to be a viable platform with the Xtreme so capable at hauling two (when fitted with the twofer seat).

The only quirk both these new sleds are unable to rationalize is the extra-wide tunnel. When you first swing a leg over a 20-wide sled you’ll notice your legs are pushed apart as a result of the way-wider tunnel. The sensation is a bit weird at first then it usually goes away. Sometimes it doesn’t.

I’ll attempt to entertain you with a walk-around of the Titan when it arrives very shortly. I might even do a repeat walk around on the XX and include the Titan – just for perspective.