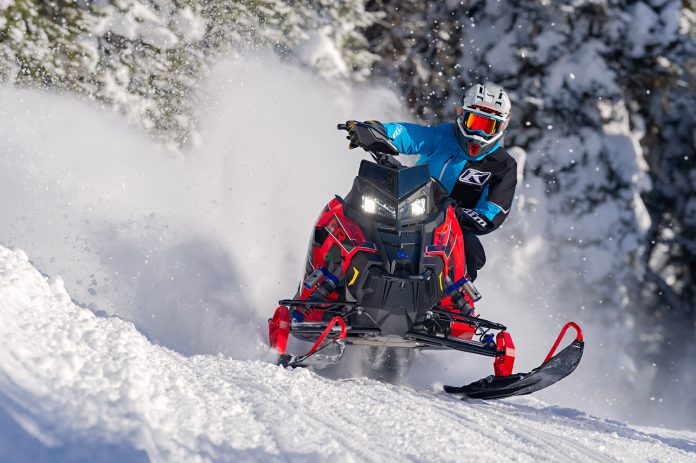 We recently put out a story on this website about the Gyroscopic Effect and how it affects multiple cylinder engines in a snowmobile chassis.

Just to review, the Gyroscopic Effect is defined as: “The ability of a rotating body to maintain the steady direction of its axis of rotation”. Both mass (weight) and speed of rotation entered into the discussion.

Keep in mind, we’re talking about a proven and tested law of physics here – not some trumped-up theory we’re trying to sell.

Where are we going with this? Well, it’s interesting if you apply the Gyroscopic Effect to Polaris’ future snowmobile product as far as a new 4-stroke goes.

We’ve been hearing rumblings and rumors for a couple of years now that Polaris has been working on a new 4-stroke for its snowmobile line-up. If that’s true, there are more than a few considerations worth looking at.

Sure, there’s always a lot of smoke and mirrors that goes along with these kinds of rumors but we’ve been roughly tabulating the odds on what type of 4-stroke could be coming out of Roseau, Minnesota.

Here are a few facts to think about:

1. Polaris has hung its hat on superior handling for a few years now. If there’s one aspect of Polaris snowmobiles everyone agrees on and is impressed with, it’s their excellent handling. It has become Polaris’ calling card. Would the extra weight of a heavier 4-stroke, particularly a 4-stroke triple, compromise that rep?

2. Polaris believes in lightness and has delivered the lightest chassis since the AXYS was introduced. Just the fact a 4-stroke could weigh 40 to 60-lbs. more than a comparable output 2-stroke has to have the engineers’ heads spinning.

3. Polaris already makes durable, powerful 900 and 1000cc 4-stroke twins for its off-road vehicles and those engines prowess has been proven with thousands of sales in that market. These engines are available turbocharged or naturally aspirated – boon for what Polaris might be offering in future years.

4. It makes sense that if Polaris did come with a 4-stroke snowmobile engine, the company would save millions by using technology that already exists versus tearing up the existing blueprint and starting all over with something that isn’t as time-proven.

5. The off-road market is a lot bigger than the snowmobile biz and is exclusively 4-stroke. How much sense does it make to build a complex, completely new 4-stroke with the potential for only a few thousand sales.

6. We’d love to be a fly on the wall at a Polaris engineering jam session to hear what the test results of a prototype 4-stroke triple Indy versus a prototype twin Indy look like. Goes without saying we’re pretty sure those experiments have been executed.

So, there you have it. The mystery continues.

Supertrax Onlinehttps://www.supertraxmag.com
Check back frequently for new content and follow us on social media!
Previous articleSHOULD A SINGLE HANDLE BETTER THAN A TRIPLE?
Next articleTHREE HEAVIEST THINGS ON A SLED