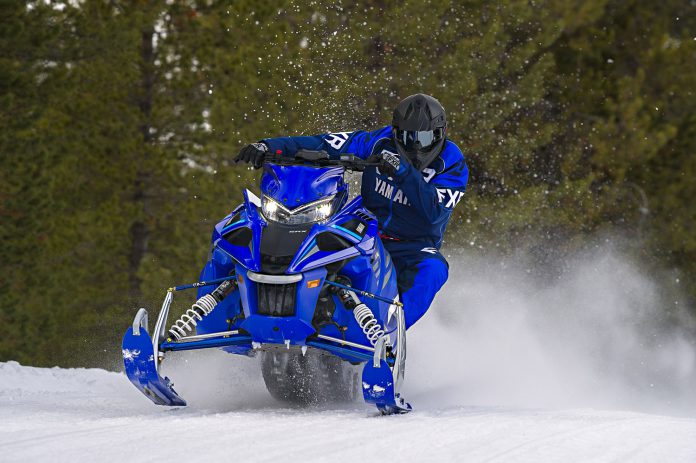 In recent in-garage bench discussions here someone came up with this brainism: Do single-cylinder sleds have a better chance of being good handlers than triples – or even twins, for that matter?

You’re guessing it has something to do with weight, right? Wrong. Although a single will inevitably be a bit lighter than a twin or triple – especially over the skis where it counts, history has proven that weight isn’t the key to good handling.

There’s actually a whole mess of sleds that have been quite light that weren’t necessary very precise in the steering department.

Okay, handling is much more complicated than just the size or configuration of the snowmobile’s engine. We get that.

However, given you have two sleds with the same chassis and suspension, and one is a triple and the other is a single, other than weight, why are we thinking the single would turn better?

Here’s where we get a bit weird. Incidentally, weirdness theories account for much more in snowmobiling than you’d expect. We could go into several paragraphs on this.

Our theory has much to do with what is referred to as the Gyroscopic Effect.

The Gyroscopic Effect (GE) is a genuine proven theory in physics and is defined as: “The ability of a rotating body to maintain the steady direction of its axis of rotation”.

The GE principle is also directly related to mass. The bigger the rotating object, the more it resists moving off its axis. Another factor is the speed or RPM the gyroscope is rotating.

This is where our theory gains some credibility. If you have an SRX with its big 4-stroke triple rotating at 8000 RPM, the Gyroscopic Effect will prove it takes quite a bit of force to move it off its axis – or turn the snowmobile. There are not only three pistons spinning the long crankshaft but there is a cam and valve gear rotating here, too.

Likewise, a Venom, equipped with a 400cc 2-stroke single (no cam, no valve gear) will require less effort or force to do the same thing at the same RPM. Thus, better handling.

We first observed this effect almost 20 years ago when Yamaha started to get serious about snocross racing. At the time, their racing 2-stroke triples accelerated super-fast but they just wouldn’t handle as well as the twins everyone else was using.

Was it the GE or was it just chassis inferiority? Yamaha took a lot of heat for that back then – and maybe it wasn’t all that justified.

Even today, snocrossers remove suspension wheels in their race sleds’ skidframes for the same reason and it’s been proven that 2-stroke freestyle motocross bikes perform big-air maneuvers better than 450cc 4-strokes because of the GE of a heavier 4-stroke.

Back in 1997, a Polaris engineer told us the transition from big triples like the Storm into the XC-Series twins showed a “crazy improvement” in handling because of the Gyroscopic Effect.

There’s another big factor here, too. Any sled’s rotating track and drive axle represents another version of the gyroscopic effect. Although the track spins slower than the engine’s crankshaft, it’s still a lot of mass rotating across the axis of the sled, thus more resistance to turning.

Carrying this thinking forward, you could surmise the new Venom or its Cat counterpart, the BLAST, with a 14-inch-wide, lightweight 121-inch track and a single cylinder engine, should handle better than most sleds out there. Hmm.