THE NEXT BIG THING IN SUSPENSION 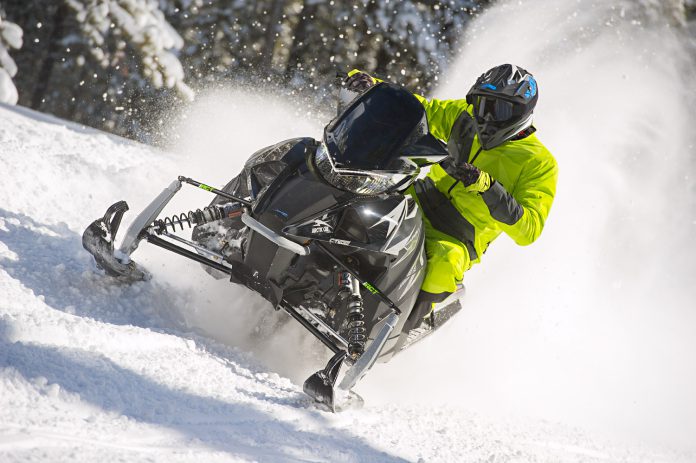 Seems there’s almost always something lurking on the horizon that’s supposed to be the next big thing.

Sometimes the “thing” actually makes it to our sport but turns out to be not-so-big. Think about Electronic Power Steering.

I believe we’re on the cusp of a “thing” which will turn out to be “big”. My rationale goes like this. Most of the pieces of the next big thing are openly displayed and available on 2019 sleds from both Arctic Cat and Yamaha.

They only lack a few more pieces to become paradigm shifting. Furthermore, off-road SxS OEM, Polaris, has the next big thing done and available on certain 2019 RZRs.

Active suspension. Polaris raised more than a few eyebrows when it introduced the RZR Turbo Dynamix a few months ago. Dynamix is Polaris-speak for “active” suspension.

Active suspension means your sled’s shocks will be in a state of continual damping adjustment as sensors read and process the shocks movements.

The sled’s ECU will process data from the sensors and make millions of split second adjustments to the shocks to better respond to the terrain you’re covering.

The new iACT system on Yamaha Sidewinders and many Arctic Cat models already use similar shocks suitable for fully active control, complete with stepper motors on the reservoirs, controlled by the rider.

To be “active” these shocks only need speed sensors and a chassis-mounted yaw sensor to feed inputs into the sled’s expanded ECU. This hardware is available right now and Fox is the predominant supplier of this technology for off-road vehicles. I’ll go out on a limb and assume they’ll have the full system available soon for snowmobiles.

WHY IS IT IMPORTANT?

Whiz-bang tech can be good or it can be a gimmick. In the case of the RZR with Dynamix active suspension, it’s the real deal.

Luke had the privilege of wringing out one of the first RZRs with Dynamix and came away thoroughly impressed. He felt the ability to attack crazy terrain at speed was almost limitless.

The shocks reacted to speed and yaw inputs so quickly the RZR actually felt as if it was floating over jinormous bumps and jumps. Dynamix also responds to turning G-forces and body roll, keeping the RZR laser level in turns.

When it comes to rough terrain, snowmobiles appear to be a great place to apply this active suspension technology. For the record, we suspect the OEMs agree with this assertion because it is no coincidence we’re seeing oh-so-close to active suspension on these 2019 models.

Snowmobiles cover incredibly rough terrain at speed and the implementation of iACT on some 2019s from Cat and Yamaha proves the point: When your suspension can be adjusted on the fly you can ride faster and in more comfort.

Take this rationale to the next level – having the suspension automatically adjust – and ride quality over just about any kind of surface will improve exponentially.

WHO’LL HAVE IT FIRST?

An informed guess would be both Arctic Cat and Yamaha, however, Polaris has the complete Dynamix system de-bugged and ready-to-go on SxS vehicles today.

We think Polaris could actually beat Cat and Yamaha to the draw because of their experience with the Dynamix system. On a related note, we have to wonder if the call has gone out from Valcourt to KYB in Japan commisioning development of an active system for Ski-Doo.

Mark Lester
Mark Lester is Co-Publisher of SUPERTRAX Magazine and a regular Host on Dirt Trax TV.
Previous articleENDURO SUSPENSION CONFUSION
Next articleSLED OF THE YEAR AND RAD AWARDS SELECTED!