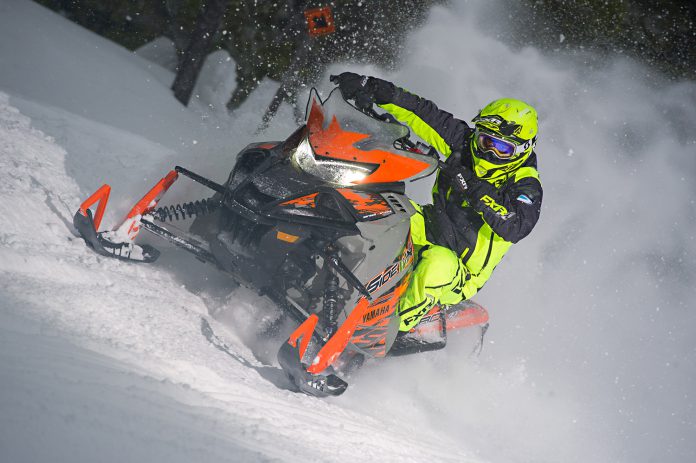 We’ve probably been asked about seven thousand times which sleds are faster, the Yamaha and Cat turbos or the Ski-Doo Gen 4 850.

Although we don’t have conclusive lake results yet, we can tell you it’s really close.

The biggest problems in a comparison are: a) finding a lake where the ice is safe and the snow packed down or a long strip where we can find smooth, hard packed snow and b) traction.

Both these sleds will just puree the track when you get into the throttle and will easily spin the meat beyond 70-per. We don’t have max-studded tracks yet on either so it’s really hard to define whether one will run away from the other.

The turbos develop such mega torque down low that the 850 will pull away because of track spin. Up top, when the clutches are nearly shifted out, the turbo literally jettisons the sled up to speed and any advantage the 850 had is eaten up.

Based on our experience so far we think the two turbos might be capable of higher top speed than the 850 but in a 1000-foot or shorter race the 850 will be the winner – maybe only gaining a sled length or two. On a long lake run it’s just the opposite.

We’re really curious to try out the 850 against the two turbos when all sleds are studded up and ridden under ideal conditions for a flat-out compare.

The 850’s new roller primary is a game changer and just may be the difference when we finally get these sleds to hook up.

Kent Lester
Kent Lester is Co-Publisher of SUPERTRAX Magazine and a regular contributor to this website.
Previous articlePHAZER OR VIPER?
Next articleSKI-DOO 900 ACE TURBO