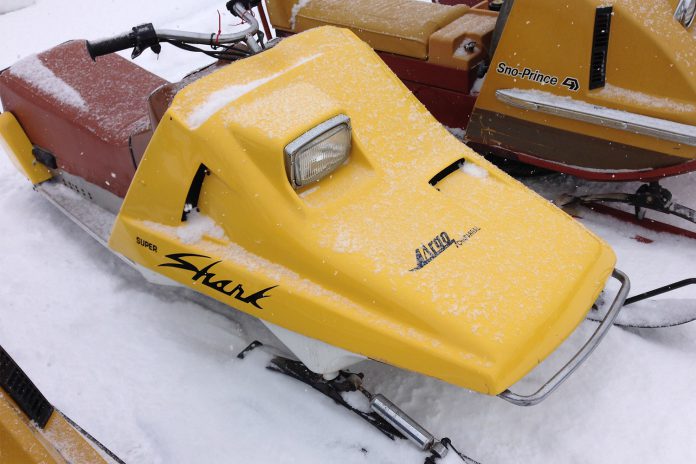 For 50 years Ontario Drive and Gear (Argo) has been building amphibious 6 and 8-wheeled off-road vehicles for outdoor enthusiasts, but raise your hand if you knew Argo built snowmobiles in the mid-70s!

A few years ago I went to visit an acquaintance of mine, Don Richardson, who over the years had built up quite a collection of vintage sleds. He was selling off the majority of his collection and I was curious to see just what he had.

As I was looking around I noticed an unusual sled off in a corner of his property. As I walked over to it I found myself looking at a long nosed Argo Super Shark.

I was immediately intrigued and asked Don how he came to own it. I learned he’d found it in a boathouse where it had been sitting for over 30 years. I must say it was a far cry from being a pretty sled by any stretch of the imagination, yet it was in very decent shape.

My good friend Rob Rickward who is a local Polaris dealer ended up buying this Super Shark. Turns out Rob knew of these sleds and back in the 70’s when Rob and I raced, he was riding an SSX Chaparral and it had the same liquid-cooled Chaparral Xenoah engine as the Super Shark.

Argo produced sleds from 1973 to 1977 with the first sleds produced in 1974 called Sharks that featured two engine options – a 400 and a 440 Kioritz fan-cooled, reed valve engine.

In Argo’s first year of sled production, 500 units rolled off the line. That year Argo stated its main promotional thrust would be through race participation in stock classes. Personally, though, I can’t remember ever racing against one.

The first Super Sharks appeared in 1975 with liquid cooled Xenoah reed valve engines. The 340 produced 40 horsepower and the 440 produced over 50. Argo carried on production in 1976 and from what I’ve learned; a limited build model was produced in 1977 called the Argo/Chaparral Super Shark. It weighed in at a svelte 353-pounds and had an internal 15.5-inch track with duo-flex slide rails, tuned exhaust and dual Mikuni BNO carbs. The tag line for this model year was, “Slide in behind the long, sleek nose of the Argo/Chaparral Super Shark”.

Argo was no different than so many companies in the 70’s trying to be players in the snowmobile industry. Despite the company’s best efforts its sleds were not moneymakers and like many other brands of the day had a short life span.

How well the Argo Super Shark actually ran I couldn’t really say. I do know my buddy Rob has his running and this winter I may actually get a chance to try it. Better yet, maybe he’ll haul out his SSX Chaparral and we can have ourselves a 2-lap feature!