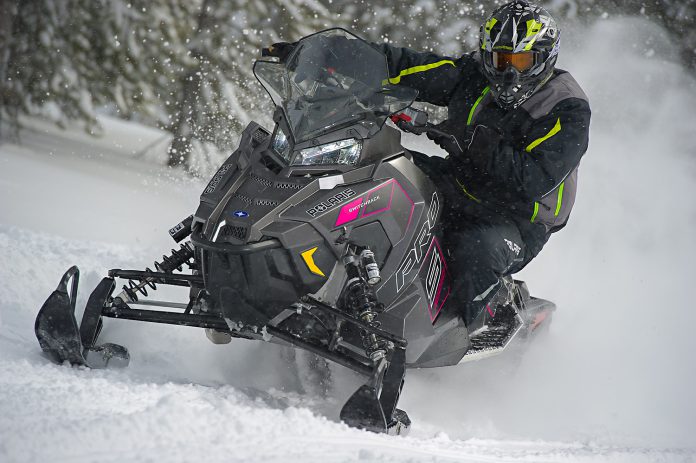 The Pro-XC rear suspension used on the RUSH and Switchback 136 is probably the most technically unique back end in the business.

What makes it so different is the way it separates the main shock from the skidframe. The main shock is mounted at the rear of the snowmobile tunnel, actually under the seat, and through a system of levers, transfers the rear half of the suspension’s movement down to the track and skid.

Polaris feels the only road to a completely rising rate rear end is to separate the two shock functions, much like a motocross bike does. Their opinion is this provides more range, better use of the suspension’s travel and eliminates any possibility of bottoming out.

One of the big advantages of this setup is, because there’s only one shock in the skid and the bigger primary shock is outside the skidframe, there’s a significant reduction in unsprung weight as the suspension moves through its travel. Thus the shock is able to respond to impacts more precisely with a lighter skid.

This same strength was actually a bit of a weakness with the original Pro-Ride (prior to the AXYS) as its rear shock and coilover spring was very sensitive to rider weight and the speed and type of terrain the sled was ridden over. If spring settings were too soft and compression damping not fine-tuned, the sled would bottom out and, if set too stiff, ride compliance was compromised. To some riders, the complexity and sensitivity was too difficult to get right.

The new Pro-XC version, now in AXYS based Polarii, rides much better while still maintaining good adjustability. We like the way this setup resists bottoming but its ride compliance, although very good, is certainly no better than some coupled shock-in-skid systems like Ski-Doo’s rMotion and Cat’s Slide Action.

Shock and spring adjustment is super-easy on the Pro-XC because clickers and the rear coil spring are easy to get at, since they’re mounted outside the tunnel.