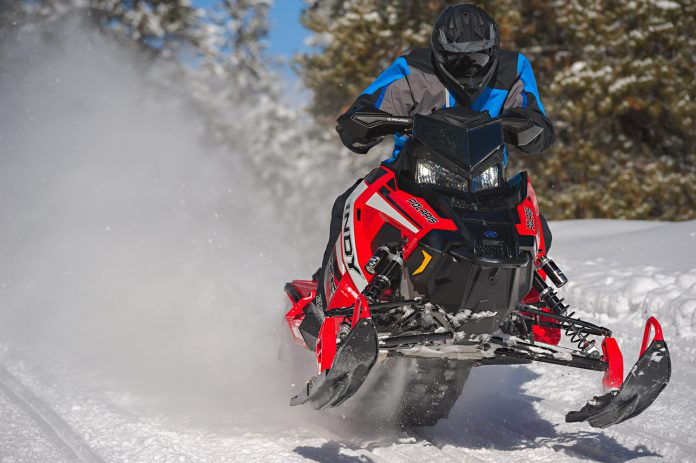 About the only thing that hasn’t changed with the newest Polaris high performance ride is the name, “Polaris”.

Okay, it is a Polaris. Yes it’s an Indy but cast in a different mold than the current crop of Indys, that have been mostly marketed as a value brand, not top performance models.

Yes, we’ve seen the acronym XC before but it’s been a long time, and this latest Cross Country (XC) is so different from the late 1990s genre it isn’t even worth talking about. Here’s more new: Under the hood there’s an all-new 850cc 2-stroke twin that’s gonna rock the entire industry next year.

… AND MORE
Finally, a 129-inch track – something we’ve been crowing about for the past three years. Finally – Pro CC – for “Conventional Coupled”. It’s been a while since Polaris has used double coupling on a top performance model.

The new Patriot 850 is as new as new gets. Everything, including the cases, crank, cylinders, pistons, heads, semi-direct injection system (no longer referred to as “Cleanfire” on the Patriot) and the list goes on, is new. While the new 850 does use a slightly heavier crank than the Liberty 800, it’s lighter than the competitions’ and employs the largest PTO bearing we’ve ever seen.

The new Patriot wins the vibration control contest producing less rumble, ski-tip shake and windshield chatter than even competitive 800s. This enormous improvement in big bore NVH is linked to both the new engine’s crankshaft and a radical, never-seen-before mounting system.

The 850 produces what Polaris claims is 9-percent more HP than the Liberty 800. Hmm… our calculator sez the new 850 delivers 170 ponies. On the trail the engine’s power curve is flat, seamless and smooth with great low-end chug and corner-to-corner wheelie power that’s easy to modulate.