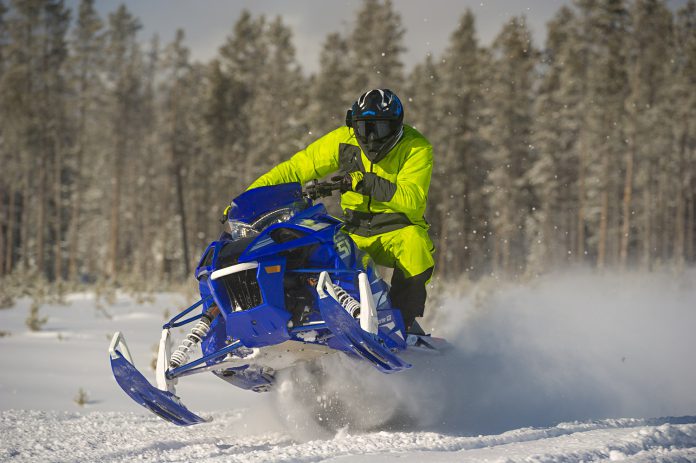 Although Yamaha’s 2019 new-sled lineup isn’t earthshattering, one new sled is sure to capture the imagination of a lot of performance riders obsessed with top speed. The company has revived the SRX name this year and built a sled that mirrors the SRX it built in the late 1990s and early 2000s.

Even the colors resurrect the image of that SRX – deep, rich racing blue with big, blasting white graphics. The SRX logo is boldly evident on the sides of the cowl and leaves absolutely no doubt this is a very special limited-availability Sidewinder.

Yes, it’s only available on Yamaha’s early-order program, so if you want a copy, you’d better order up soon.

We think this sled has the potential to be a collector’s piece, and here’s why: Yamaha is stating outright this is the fastest production snowmobile ever offered. Hmm, we all know this turbocharged triple is making somewhere between 180 and 200-hp depending on the outside temperature – and the SRX uses the same engine, turbo and clutches as any other Sidewinder. However, the SRX is unique in that its 137-inch track and aerodynamics will allow absolutely blistering top speed on lakes and drag strips – even more so than other Winder variations.

What’s the difference? The SRX is lowered about 1.5-inches compared to other Sidewinders. Lowering the sled creates less drag at the front of the track and, in effect, “hides” the track from oncoming air at high speed. There’s a lot of drag at the front of a snowmobile’s track where the air inside the tunnel is being propelled forward by the sled’s track lugs. This pressurized air exits at the front of the track underneath the sled’s belly and this “air-against-air” situation amplifies drag and prevents the sled from utilizing all of its top speed. This drag also limits traction and creates lift when you get the sled up into triple digits.

Think of a giant hand in front of the sled slowing it down. A lower stance will make that hand much smaller and reduce drag enough to allow the SRX to really stretch its legs.

The track is a mere 1-inch lugger, and although it seems crazy to use a track this shallow on a super-powerful sled like the SRX, there is logic here. A shallow track is thinner because there’s less rubber required at the base of the lugs. This means the track rotates very easily with almost no resistance. A free-wheeling, low-friction track enables any sled to get all of its horsepower down to the snow.

Keep in mind, the goal here is bragging rights to maximum top speed and we have no doubt the SRX will likely top out a few mph higher than other Sidewinders. Did lowering the sled sacrifice ride comfort? Our own test riders have told us the SRX is flat-out the best riding Sidewinder yet. Its new, from-the-handlebars adjustable Fox Zero IQS shock setup really works and delivers great compliance. Apparently on groomed trails, the lowered sled carves like it’s on rails, too.