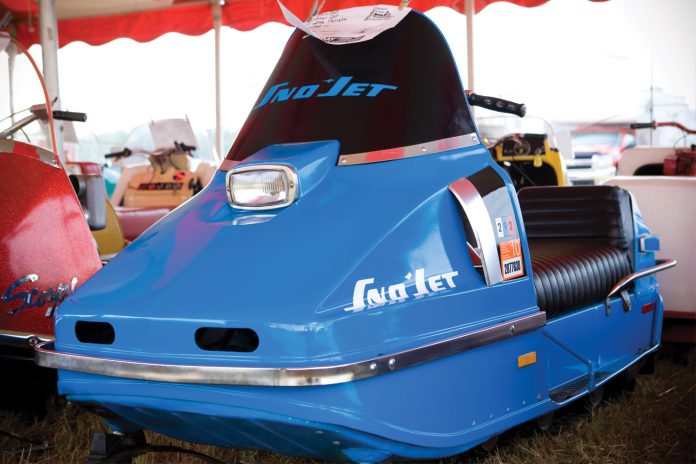 Sno-Jet began in Thetford Mines, Quebec in October 1964 and the original design was the brainchild of two fiberglass workers, Paul-Emile Roy and Maurice Fillion.

The two later formed a partnership with an accountant named Theberge and a plumber by the name of Pelchat. By 1965, production was up from 25 sleds the first year to 1,150 and 4,400 the third year.

By 1968, the original owners realized they couldn’t keep up with the rapid growth of sales and sold the company to the Conroy Company of Texas and put itself under the wing of the Glastron Boat Company.

After only five years, total sales ballooned to 25,000 snowmobiles. Unfortunately, this was the peak of production for the brand and sales continued to fall all through the early and mid-1970s.

By 1976, after the Arab oil embargo, Sno-Jet was annexed by Kawasaki, a company just getting its feet wet in the business.

Sno-Jet ‘s claim to fame was aluminum construction. Many of the earliest sleds used aluminum tunnels and bulkheads and the company’s pure racing Thunder Jet, introduced in 1972, was so light the competition felt it had an unfair advantage.

Until 1970 the company used Hirth 2-strokes exclusively then converted to Yamaha engines until the end of its days.

Interesting to note, in its prime in 1975 the Thunder Jet’s Yamaha twin, in racing form, made a whopping 65-hp.

Supertrax Onlinehttps://new.supertraxmag.com
Check back frequently for new content and follow us on social media!
Previous articleSkiroule Was Known For Style
Next articleRupp Was All About Speed