Rupp Was All About Speed 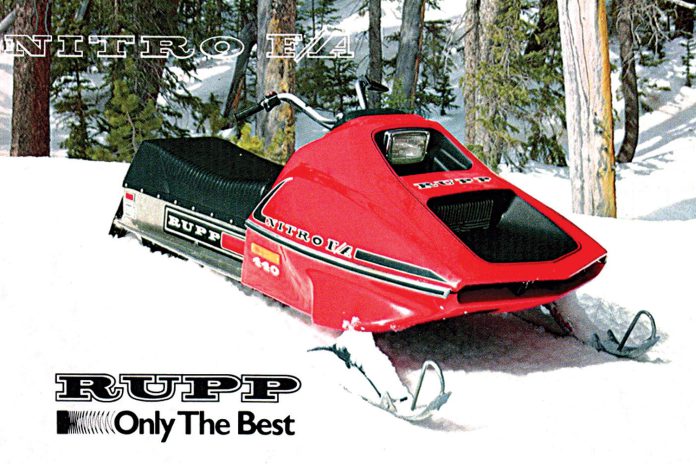 By 1965 Mickey Rupp had established himself as a well-known and very competent auto racer with his sixth place finish that year in the Indy 500.

From the earliest years, as was his dream, Rupp snowmobiles became synonymous with performance.

The company built its first prototype in 1964 and then began production in Mansfield, Ohio.

Originally powered by Tohatsu 2-strokes, Rupp graduated to Kohler power and eventually to a red-hot but tempermental Xenoah liquid-cooled twin with CDI that featured a coolant heat exchanger in its hollowed-out, aluminum front bumper.

Aluminum construction was one of the hallmarks of Rupp and it’s why they are still sought after as vintage racers now.

In fact, the concept of a hollow aluminum cooler probably was the predecessor to the heat exchangers we see on all liquid-cooled sleds today.

Also, the Rupp Nitro 440 featured reed valve induction and that, too, was a rarity in the mid-1970s. Primary and secondary clutches for racing Rupps were provided by Arctic Cat.

Although Rupp snowmobiles were always known for their extreme performance proven in successful racing results, and their innovative technology, Mickey Rupp was forced to close the doors in 1978 and the company then focused on manufacturing Gorman-Rupp pumps in Mansfield.

Mickey continued to race boats and airplanes well into his retirement years.