Skiroule Was Known For Style 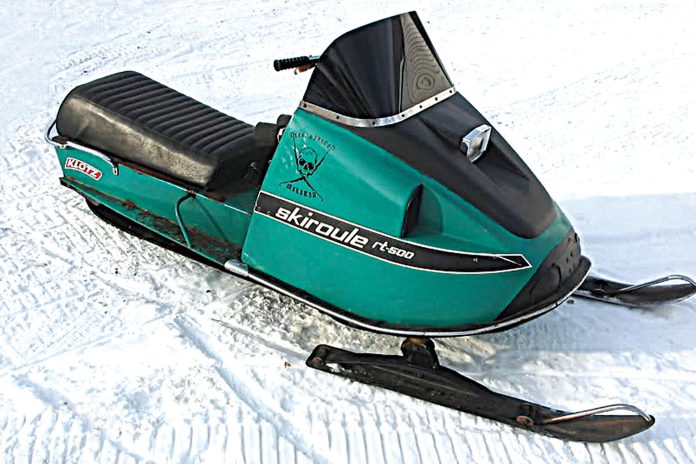 The creator of Skiroule snowmobiles, Rejean Houle of Wickham, Quebec was an avid 20-year-old entrepreneur who built prototypes of his ideal snowmobile and then sold his concepts to the Coleman Company, makers of outdoor camping equipment.

The original Skiroules bore an amazing resemblance to the Ski-Doo Olympique.

In the beginning, Skiroules used tunnel-top mounted Sachs engines and by 1970 were known for their low-slung, very aero hood styling, belying their relatively high-positioned engines.

The company used the RT acronym to describe its model line-up and RTX denoted its highest performing sleds and racers.

In the late 1960s the sleds used bogey wheels but in the early 1970s Skiroule graduated to a slide rail suspension with dual outboard coilover shocks mounted on a reverse angle and integrated into the steel rear bumper.

Canadian Tony MacKeen did the original top-mounted engine hood styling and had to re-adapt his designs when Skiroule eventually relocated the engine into the bellypan in the mid-70s.

Skiroules were always at the top of the heap when it came to sleek, low, good looks many felt were decades ahead of anyone else.

In 1977, Coleman decided to focus its efforts on camping equipment and in a difficult economy, closed its doors on snowmobile production forever.