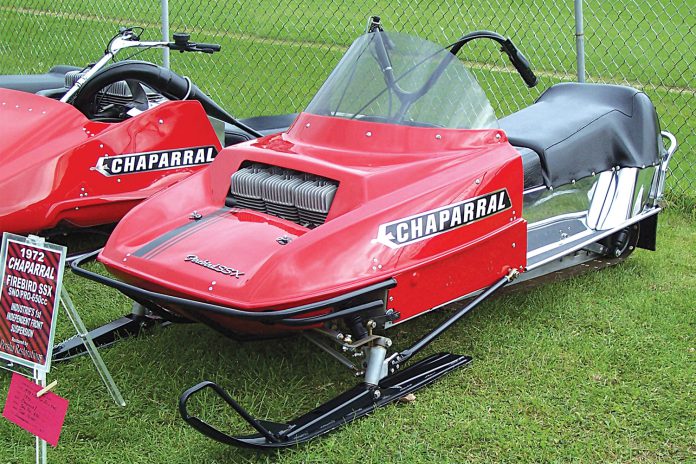 In 1967, Chaparral Industries, originally known as “Snow Birdies”, opened a plant in Grand Junction, Colorado. Production later moved to Denver. The earliest sleds featured a fiberglass tunnel, had the gas tank mounted under the seat and used JLO engines.

It debuted on the oval racing Firebird SSX in 1972 and had a completely weird, later banned, huge airfoil bolted to the front bumper in front of the driver to increase downforce.

Those Firebirds were 440 and 650 free-air Fuji triples with CD ignitions, triple carbs and strangely routed triple pipes. The 650 produced 105-hp!

Its independent front end was a dual radius rod, trailing arm design using coilover shocks and a swaybar and delivered 5-inches of travel.

This design was a precursor to what the famous Polaris Indy used and was later adopted by Ski-Doo and Yamaha.

Chaparral racers tell us there was a lot of scrub and bump steer with the IFS design and the company was never quite able to get it figured out.

Interestingly, the earliest SSX IFS racer (1972) used an aluminum skidframe with outboard mounted shocks and 4-inches of travel but relented and went to a more durable and heavier steel one in 1973.

In 1974 Chap abandoned the IFS front end and went back to a more conventional leaf spring design.

Then owned by Armco Steel, Chaparral ceased business abruptly in 1974 and many felt it was due to the recession caused by the Arab oil embargo that left thousands of unsold snowmobiles from all brands in inventory.

There were offers considered by American Motors to buy Chaparral but in the end, there was no solution.