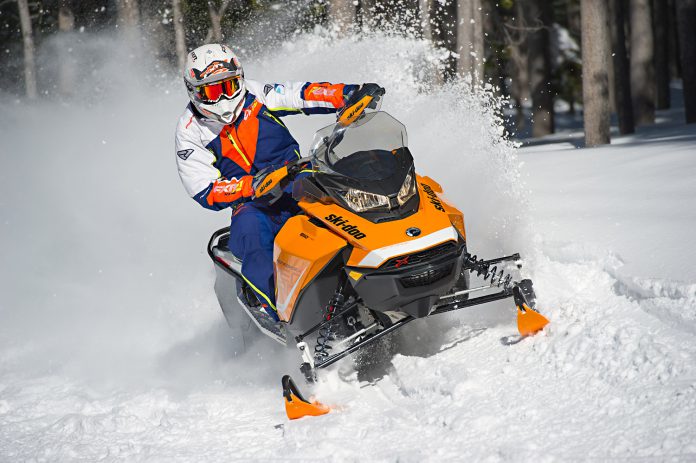 Now that Ski-Doo has dropped its G4 850 onto the snowmobile world, it looks like the next thing to ask is: “What about the 600-class?”

It only makes sense Ski-Doo intends to make the G4 REV its next exclusive platform for all of its models. This means its 600cc sleds will adopt the G4 fingerprint too. There’s more to it than meets the eye, though.

A close examination of the G4 reveals its 850 E-TEC is a uniquely designed engine with extremely narrow cases so it can be mounted in the center of the belly pan. When we say center, we mean side-to-side, not just fore-and-aft.

The idea was to allow the sled to be built as narrow as possible for off-trail freestyle ventures into deep powder and for mountain applications. Narrowness is good in these environments because it allows the sled to be much more maneuverable when laying the sled on its side in deep snow when pivoting and also to reduce drag from the bodywork (paneling) in deep snow.

Back to our 600cc theory: First, if Ski-Doo even comes with a 600 again (it could be a 650 and cause a re-write on all the rules in this class) it will likely be a completely new 600 E-TEC with many of the durability features offered on the 850 (steel ring lands for the pistons and exclusive crank oiling, including a throttle body oil injection site) and narrower dimensions using the 850’s stator.

This means a new set of blueprints and the opportunity to really go one-up on the competition.