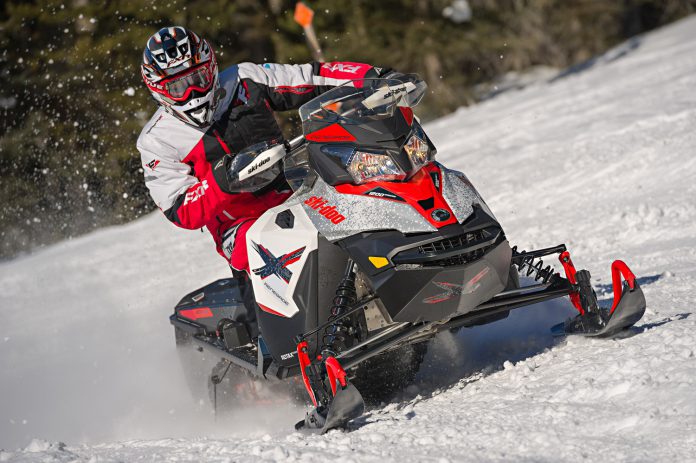 This year we’ve been waiting for Polaris to come to a decision on whether or not it will bring a new 4-stroke to snowmobiling, however, an even bigger big 4-stroke issue has to do with Ski-Doo.

The company tells us it leads the industry in 4-stroke sales with its 1170cc 4-TEC triple and its two ACE engines in 600 and 900cc configurations.

We wouldn’t even be asking the question if Ski-Doo hadn’t brought an extremely updated new G4 chassis to market, housing its 2-stroke engine selection. So far, all Rotax 4-strokes are offered only in the now-outdated XS platform.

What makes the question interesting is the fact the G4 platform has very little width allowance, even for a 2-stroke. The way the engine bay is laid out, narrow is the vogue and the new E-TEC 850 and any future engine designs will likely use the E-TEC’s “flat stator layout” that greatly reduces width.

It seems pretty clear that if Ski-Doo were to use the current 1170 and 900cc triples in the G4, there would have to be some pretty severe changes made to accommodate those engines.

We find it hard to believe, given Ski-Doo’s sales success in the 4-stroke segment, it didn’t think about this already. Two years in with the G4, we’re guessing Ski-Doo has been working on a new 4-stroke chassis design for the last three or four years, at least.

Ski-Doo certainly isn’t willing to see its 4-stroke customer base walk away from the brand because it isn’t offering the latest technology. It seems logical the company would merely design a wider front bulkhead to house the 4-strokes it already has. However, it wouldn’t surprise us either if Ski-Doo has an all-new engine, narrower and in the 1000cc range based on the ACE design, that will fit a new “G5” 4-stroke-only platform.

Ski-Doo never takes small bites out of the competition. Its next generation of 4-strokes could be radical!