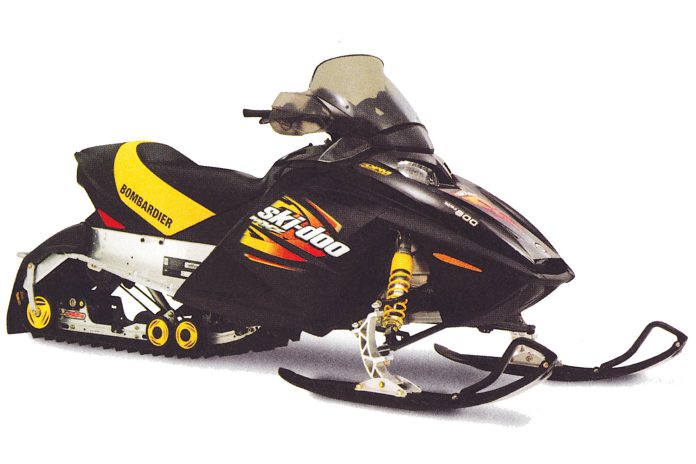 Ski-Doo took a huge swipe at its competition when it unwrapped the original “beaver tail” REV.

Up to that point snowmobiles had become pretty much carbon copies of one another from brand to brand.

The standard was: Sit-down ergonomics, independent front ends (three of the OEMs were using trailing arms and only “radical” Arctic Cat offered double A-arms) and long travel skidframes with the driver sitting over the skid’s rear arm.

The new REV not only looked different, it really was different from tip to tail. The rider sat way forward, hugging the gas tank in a configuration similar to riding a motorcycle. The engine was moved rearward, closer to the middle of the sled to “centralize mass”, a concept only talked about and never executed until that point.

What stirred the public’s imagination was the fact Ski-Doo had been running REV prototype racers in snocross previous to the sled’s introduction and those sleds were cleaning up. The competition just couldn’t be as fast using conventional chassis layouts.

In 2002, when we had our first rides on prototype REVs in Quebec and Utah, we benchmarked them against several sit-down Ski-Doos on pretty aggressive trail rides. There was simply no comparison.

The REV could go faster over rougher terrain, could corner better (and the early version didn’t corner as well as it would later) and the rider was flat-out more comfortable on long rides, alternating easily between sitting and stand-up riding.

The REV was an unqualified win for Ski-Doo and rocketed the brand to first place in an eye-blink. It’s still there.