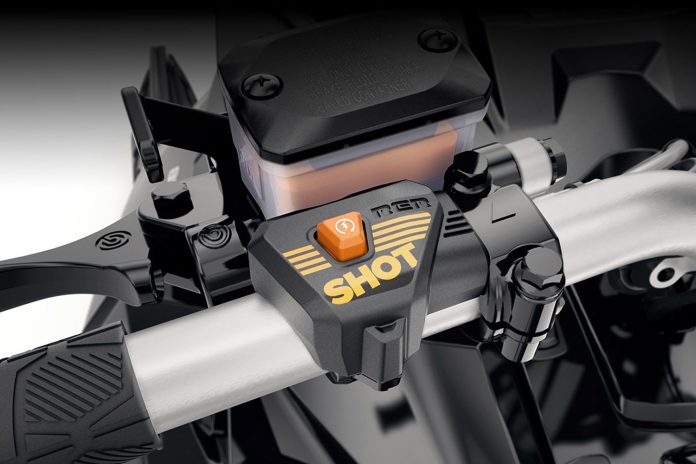 There’s a ton of new stuff on display at Ski-Doo’s annual dealer show and new product unveil in Reno, Nevada. In fact I had the privilege of riding and experiencing the new stuff a week ago in Valcourt.

So here’s what stands out to me – SHOT. It’s Ski-Doo’s (and Rotax) proprietary, never-been-done-before battery-less, motor-less electric starting system, which is so unique it’s a little confounding and mind boggling all at once.

Think of this reality. The SHOT system provides functional (with a couple limitations) push button start for just 2 pounds of extra weight. There’s no heavy lead acid battery, starter motors and associated brackets, which currently weigh in at 20-22 pounds on an average Ski-Doo.

The SHOT system arrives as a “Summit-only” mountain model factory option (the system cannot be dealer added). The limitations – at this point in history – are as follows…

You must rope start your 850 E-TEC in the morning and give it 2 minutes to charge the 2 pound capacitor. After this initial charge, the capacitor will re-charge after each subsequent re-start in about 20 seconds. The system only works on E-TEC engines as they always start (when warm) in less than a half crankshaft rotation. The capacitor will hold it’s charge for 30-45 minutes after shutting the sled off. Essentially, mountain riders who do a lot of fiddling, digging, rolling and otherwise helping each other in a day’s riding will only rope their 850 once each day.

Why do I think the ground is shaking? My immediate question to the engineers at Ski-Doo was: “If the capacitor weighed 4 pounds could it maintain a charge all night and become the new way to start any E-TEC?”.

I’m sure this issue is on the minds of the brain trust at Ski-Doo, but can SHOT follow the same development path the very first RER system did when it first reversed a humble single cylinder Tundra way back in the 90’s?

If this technology – which uses the stator as the electric starter motor – can be honed and further developed, the day may not be far off when push button start weighs in at 2 pounds.

Think I’m crazy? When that first RER hit the ground I heard tons of comments how it wouldn’t work with a twin, a triple, with exhaust valves, with certain clutches and secondary’s and the list went on.

Now, RER and its licensed variants on Arctic Cat and Polaris sleds is standard across all 2 stroke models. Arguably 20-30 pound mechanical reverse gear systems are history – gone and forgotten.

These guys at Ski-Doo are pushing the boundaries of sno-mo-technology. Yes, the ground is shaking and there is most certainly more to come from this mysterious, revolutionary and effective starting system.