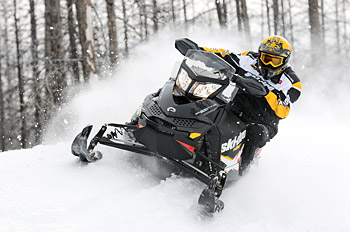 You’ll be reading our estimations on all four manufacturers’ 2013 models over the next week or so. Here are a few of our predictions for Ski-Doo:

It’s tough to improve on a snowmobile platform that already leads the industry with its lightness and a series of engines that are the undisputed leaders in EPA conformity and at the same time offer top gas mileage and super-miserly oil consumption.

However, the competition has really been stepping up the last two years and the gap between Ski-Doo’s exclusive domain and Polaris and now Arctic Cat, has been getting much narrower.

In MY 2012, Ski-Doo expanded its use of the E-TEC 800 into other segments and has had much success, particularly with the 137-inch GSX.

We think this engine may also appear in a Grand Touring SE this year, giving buyers the choice of a lighter 2-upper with all the bells and whistles.

Much more important is the single Achilles heel with the MX-Z XP – its front end.

Although this sled is still one of the industry’s best handlers, after riding Cat’s new ProCross and the newly modified Pro-Ride Polaris, there is some room for improvement.

We think Ski-Doo has been on it for a couple of years and has a new front end design adapted to the XP, probably one with wider spaced A-arms and perhaps a non-parallel design like Polaris has offered since the IQ.

There will be patent battles but Ski-Doo wields some pretty powerful advantages here.

Look for the rMotion skid to become available in more model iterations, including the Renegade.

This rising rate design has been a huge success and is in big-time demand among the Ski-Doo faithful.

The 4-TEC 1200 will get a tune-up. This engine is so close to dominating the 4-stroke wars, but suffers from throttle lag and at 130-hp is just under the hypersled performance bar.

We look for throttle body mods and perhaps a redesign of the intake tract to bring this sled up closer to the 150-plus horse mark.

If this happens it would take the MX-Z 4-TEC’s power-to-weight up into the range of the fastest 4-strokes, including Cat’s Turbo.