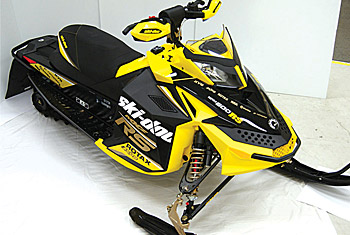 Is This A Prelude To The E-TEC II?

Moments after Hay Days concluded this past September, Ski-Doo sent out a Press Release on its vastly updated MX-ZX 600 RS limited-build Sno-X and terrain weapon.

There’s news here we believe has significant implications for production Ski-Doo XPs. First, the RS gets what amounts to a completely new mill.

There are new cases, a new crank with a “patented” design and new cylinders producing as much as six additional horsepower. That’s significant.

Here’s what we know from years of watching the OEMs: No manufacturer will tool an all-new engine solely for use in 300 limited build racing snowmobiles. This engine may contain the subtle tweaks necessary for the move to the rumored E-TEC II system we’ve already mentioned.

Last year’s RS debuted Ski-Doo’s rMotion skid, code named “PCX” until the limited release rMotion had the sheets pulled off in February. The 2012 RS uses the rMotion with updated race calibration for its shocks and springs.

The biggest piece of info here may very well be the new front end hanging off the RS. Interestingly, the MY2012 RS uses taller spindles (Hmm. Where have we seen taller spindles lately?) and a new steering post and upper A-arm producing a steeper caster angle.

There’s no doubt the XP platform with rMotion out back is near its limit with the current RAS double A-arm IFS used on production XPs.

Could this tweaked RS IFS be destined for the anticipated, updated 2013 XP?