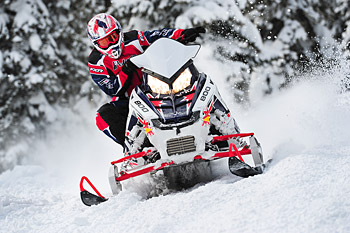 Now that the snow has arrived pretty much everywhere people snowmobile we’ve had a chance to sample a few 2013 sleds.

As you’ve read, we’ve been very impressed with the 800 Cats but also have to give kudos to the Polaris RUSH 800.

Although the sled doesn’t appear grossly different from last years version, the product people have been busy getting all they can out of the RUSH rising rate rear suspension to get it closer to Ski-Doo’s rMotion.

This year’s RUSH has stepped up considerably (again) and its performance over trail chop and deep whoops at trail speeds is even better than last year’s vastly improved Pro-Ride.

Keep in mind there are two advantages to this style suspension: First, there’s very little chance of bottoming it if it’s set up right for the rider’s weight.

Second, this back end transfers like no other sled out there. It will lift its skis on command and carry a “wheelie” for a long way if you keep the gas on. This feature enables the sled to get out of the hole and accelerate hard way past its midrange.

It only gives up a bit to the competition at the top end but this 155-plus engine is a beauty to ply and runs extremely smoothly for a big-inch 2-stroke. Clutching is superb, just as it was last year and the handling is absolutely premium.

Certainly one of the nicest handling snowmobiles we’ve ever ridden. Its neutral turn-in and predictable oversteer lets you get the tail out and stay deep into the flipper on exits. Just so intuitive and fluid you can’t believe it.

As this is being written we’re testing some of the other 2013’s and will continue to report our findings. Stay tuned!