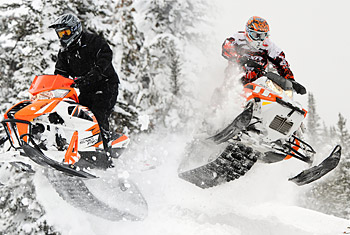 Here’s a quick synopsis of where the OEM’s sit in terms of influence, perception and marketshare.

While it is rumored Polaris actually has a bigger share than AC we think there’s some interesting forces at play at Arctic Cat that could potentially put pressure on Polaris.

1. Polaris has a well-developed and superbly positioned line-up with the RUSH, Indy, Switchback, Assaults and RMKs. These sleds are easily understood by the market and buyers know which one is the best for them with less confusion than the other brands.

2. Polaris offers all its Pro R models in-season which drives Ski-Doo nuts. You can only get a premium Ski-Doo X model on a Spring Break early order.

3. Polaris has two good 2-stroke engines it has marketed as impossible to beat from a cost-to-operate standpoint (targeting Ski-Doo’s E-TEC fuel economy superiority) as a result of their sled’s lower suggested retail price. They say it takes years to pay for the higher MSRP Ski-Doo with E-TEC fuel savings. Hmm?

4. The RMK has a literal vise-grip on the mountain market. Weight reductions, QuickDrive and carbon fiber components for 2013 are increasing this product’s cache with the ultra selective, performance driven and quick-to-jump-ship mountain buyer.

1. The Pro Cross and Pro Climb AC’s have lots of sizzle going into MY 2013 with new model variants like the CrossTour and ProCross RR.

2. Arctic Cat has been hard at work fixing first year glitches and has backed up its word with an extra year’s warranty for all 2012 ProCross and ProClimb sleds.
3. The 800 2-stroke’s much maligned performance and economy the past few years appears re-born with vastly improved performance in the new chassis and increased fuel economy. The 800 Cat is fast.

4. A carefully worded “rumor” circulating the industry says AC is about to launch its first domestic engine and it may be a 600 2-stroke.

If this engine is direct injected or even SDI, it will catapult Arctic Cat sales in this segment in MY 2014.

Polaris has left the door open without a DI 2-stroke or a 4-stroke for the Pro Ride.

Stay tuned for PART III in this series!