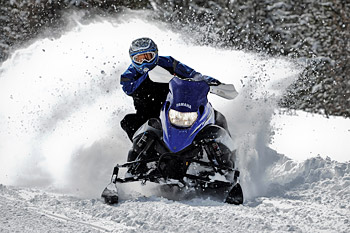 Here’s a quick synopsis of where the OEM’s sit in terms of influence, perception and marketshare.

Yamaha rode the crest of the 4-stroke wave until 2009. Its commitment to 4-stroke power appeared to be the impetus that took them back to the mainstream reaching a rumored 20% marketshare by 2008.

1. The availability of a factory blessed sea-level supercharger kit for the Nytro (albeit at a stratospheric MSRP) has injected new enthusiasm into this sled. Expect blown Nytros to show up anywhere there’s Yama-faithful. The factories wink-nudge approval of aftermarket supercharging and turbocharging has triggered feverish rumor mongering the next big thing from Yamaha will, in fact, be turbo power.

2. The Nytro’s new skis really do improve the sled’s quirky handling. Buyers will be impressed and this will ignite more sales for this model.

3. The Apex continues to be the sport’s most sophisticated 4-stroke snowmobile and therefore has a faithful and solid following despite the sled’s imposing MSRP.

4. Yamaha’s open admission it is “back in the game” has spread like wildfire. The ball is in Yamaha’s court. Dealers, consumers and the rest of us are anxiously awaiting the next big thing.

That’s how we see the OEMs as we enter this 2012/2013 snowmobile season. Forces at play this year go well beyond our power rankings. Clearly the most imposing threat is last year’s poor winter weather in many markets.

While we believe this will be a “show me the snow” fall sales environment, the faithful, core influencers who continue to carry this great sport are already buying their sleds and accessories.