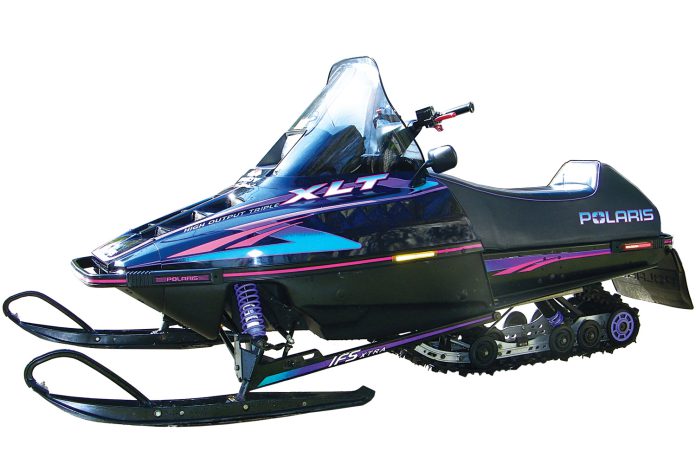 In the 1980s and early 90s snowmobile ride quality was at best, elusive. Sure, the OEM brochures claimed incredible improvements in the way their brand handled moguls. The unfortunate reality was this: 5 to 7 inches of skidframe travel was simply not enough to produce a truly plush ride.

During this time the aftermarket produced Gerard Karpik’s M10 replacement skid. While the M10 did deliver a remarkable ride, there was and still is a limited market for pricey accessories. The M10 wasn’t cheap.

Polaris was in an incredible growth mode that saw the company produce 100,000 sleds annually during the 90s.

They took a wild stab in the dark and built an Indy with an unheard-of 12 inches of rear travel – slightly less in the front.

The Indy XLT and Indy RX-L were the first recipients of XTRA 12 and they hit the ground running, establishing a level of ride compliance no production snowmobile had ever achieved.

Our first exposure to XTRA 12 was overwhelmingly favorable, save one wrinkle. The Indy’s low friction, free rolling character was significantly degraded by the obtuse angle-of-attack necessary to produce a foot of rail travel.

Some of the early XTRA 12s came with only one shock however, Polaris wisely inserted an “anti-bottoming” coil-over on the rear arm. XTRA 12 was a falling rate suspension requiring proper set up, particularly the need to allow for copious ride-in or drop-out.

Those who spun up the preload collars too far front and rear experienced a tippy, unpredictable ride.

Because the venerable Indy chassis was used, the increased travel XTRA 12 produced a tangible measure of bump steer at the front end.

In the end, the XTRA 12 Indy is remembered as a love-hate snowmobile, however, the XTRA 12 suspension system inextricably altered snowmobilers expectations for improved ride quality.

The Indy XTRA 12 gets the nod for raising the industry benchmark for snowmobile comfort.