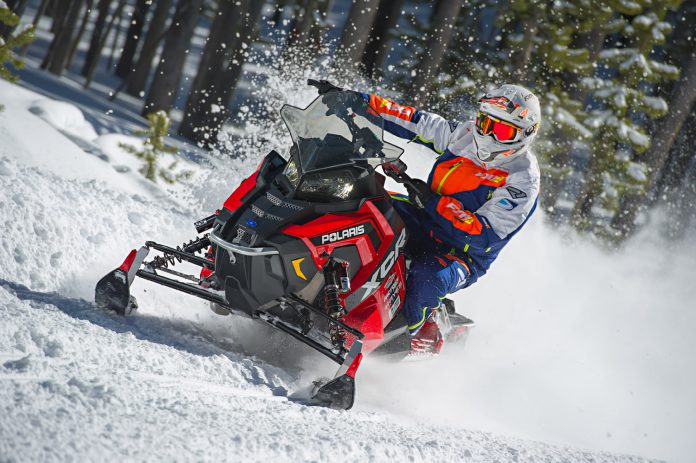 Mark and Kent Lester battle it out over their picks for the 2017 BEST IN CLASS AWARDS. THE ARGUMENT: Serious Equipment for Trails Means Serious Reasoning is Needed.

Polaris has broken from its usual tradition of marching to its own drummer to deliver what I think is the best trail sled of the year…and they’ve gotten it right the first time!

Yes, Cat and Ski-doo have had their own racer-focused consumer-available hi-perf sleds, the ProCross RR and the MX-Z X-RS, for a while now but Polaris simply didn’t join the club until this year. Once in, it has created a very serious performing sled that can run the wheels off the competition.

The basic elements of the AXYS Pro-S are all there but Polaris has taken everything up a notch with Walker-Evans suspension upgrades, smart clutch calibration and an aggressive 1.35-inch Cobra track. The XCR skid adds rail doublers and chromoly rear suspension parts along with heavy duty idlers. Brakes were improved to handle the heat from cross country racing, V-Force reeds were added plus there’s a Pro-X handlebar riser to help with quicker ergo transitions for the rider.

I know Mark will say Polaris pulled up short with a 120-inch track but this thing pivots like a cue ball and although the changes are subtle, the XCR is all business. At 125-hp, this engine and drive setup feels like it’s been doing bicep exercises and pumping steroids. Its response on the trail is absolutely telepathic.

The good news is, even though this sled is targeted at the most aggressive and serious trail riding customers, its ride compliance is excellent and it never feels harsh or choppy, no matter how insane you get.

Mark calls these types of sleds wannabes. I disagree. The XCR is the real deal!

Well Kenny, on the rarest of occasions you make credible BIC selections – or I should say you make lucky BIC selections that actually have some credibility. The operative word here is rarest – and I don’t mean your preference for filet mignon tenderness.

The new RUSH XCR is a good, maybe great, sled in its first year. However, we have to qualify your gushing kudos (big word here for Kent – get out your Funk & Wagnall) with this ever present and undeniable reality: Polaris took its sweet time before giving us a wannabe-racer AXYS!

My thinking goes like this: Arctic Cat’s ProCross RR has been hitting the Trail Performance class target dead-on for years. Two seasons ago Cat elected to shoehorn its sweet sounding, bulletproof Dual Stage Injection (DSI) 600 under the hood and… Whamo! It’s my pick for best Trail Performance ride.

Kent, in case you’re confused again, this intelligent choice is a result of rational, deductive reasoning.