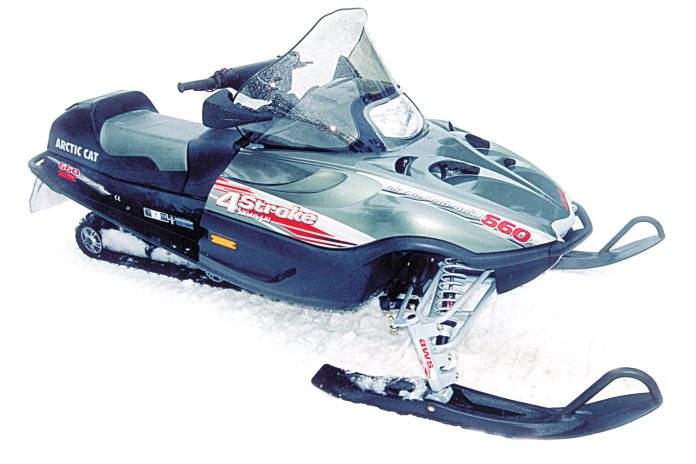 In West Yellowstone, Montana, when Supertrax first laid eyes on the new 4-stroke from Cat, the big question was… why? What you need to realize is that in early 2001, there were only rumors of impending EPA restrictions on snowmobiles, particularly on the tight Yellowstone Park rental market.

Obviously, the OEMs had a much clearer idea of what was going to be necessary ten years down the road because they were already tooling up new SDI 2-stroke technology and getting ready to build 4-stroke sleds.

4-strokes? At the time, because no one had built one yet, the idea seemed absurd. Who would buy such a thing? They were heavy and needed enormous displacement to match the performance of 2-strokes.

Even if it could be done, their weight would destroy the handling of what we then knew as a modern snowmobile.

Frankly, the first versions of the 660 4-stroke weren’t very convincing evidence those fears were not true. The sled, built on a modified ZR platform, was heavy and the engine only wheezed out a very sedate and smooth 60-hp.

Our memory of that sled was that it was capable of about 70-mph on a flat, hard surface but if you hit some snow or slush it would drag your speed down about 20-mph in a fraction of a second.

The 660 4-stroke was a Suzuki-built automobile engine used mostly in Japan. This dimensionally small 660cc DOHC triple with EFI turned out to be as reliable as a slab of granite and with some deft chassis tuning, Arctic Cat was able to turn it into a very pleasurable, albeit tame sled to ride. It hit its stride when Cat turbocharged it.