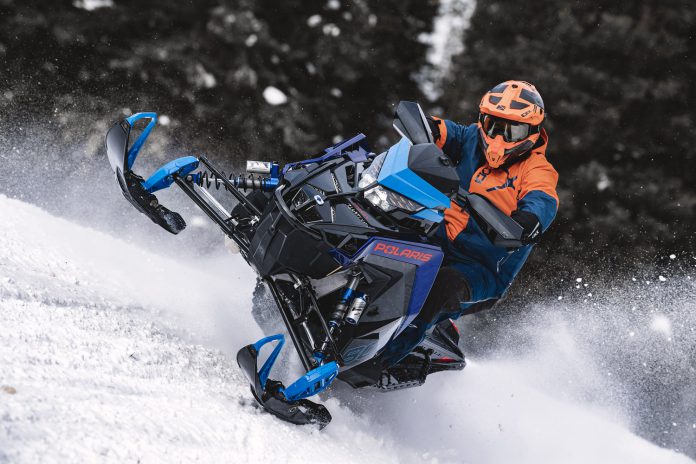 Depending on who you speak to, this sled was either a no-brainer for Polaris or a completely off-limits concept for Ski-Doo.

Here’s what it is. The Indy Boost is the ultimate power-play snowmobile employing the use of the sport’s first trail-targeted, 2-stroke turbocharged engine.

Don’t misunderstand me here – I am fully aware Ski-Doo was the first to build a production turbocharged 2-stroke snowmobile. What is important to understand is this: From the day Ski-Doo pulled the sheets off the Turbo Summit and we feasted our eyes on the sweet Rotax 850 turbo, Ski-Doo made it abundantly clear there would be no trail MX-Z/Renegade version. In fact, we (the team here at Supertrax/SnowTrax) were instructed to not speculate about or talk up such a vehicle. Hmm?

So, what happens next is the stuff of legend you can tell your kids twenty years from now. As if oblivious to the realities of Ski-Doo’s proclamation that a 2-stroke turbo Rotax would never see an MX-Z sticker on its hood, Polaris invites us to ride the 2-stroke, turbocharged Indy Boost targeted directly at the lake honing, power crazed flatlander market.

I can tell you as one of the very first members of the media to pull the trigger on the Boost in remote Cook, Minnesota early last winter, the ground shook. The reality of a factory built, 2-stroke, turbocharged, warranted trail snowmobile designed to increase sea level power of the formidable Liberty 850, not just replace power lost to altitude like the Summit Turbo, is really big news.

Yes, there are turbocharged trail snowmobiles in the market. Yamaha and Arctic Cat both offer formidable turbocharged 4-stroke powered sleds which perform at insane levels. What’s different with the Indy Boost is weight. The sled is significantly lighter and more nimble to flick around on trails. In fact, the turbo system is so effective at building power, the sled reacts to a handful of throttle like you were just rear ended by an earth mover. Seriously, the rules are simple: sit down, shut up, hang on.

No doubt about it. The Indy Boost is a game changer. It demands little to no compromise from the rider. It handles like a MATRYX which is to say it has the best handling qualities in the biz. It can be ridden sensibly on all-day trail rides without fatiguing the rider. When it’s time to send the rest of the crowd home and shorten-up Kevlar Lake, everything you need is under your right thumb.

2-stroke turbos? Okay with us.

Mark Lester
Mark Lester is Co-Publisher of SUPERTRAX Magazine and a regular Host on SNOWTRAX TV.
Previous articleMORE TURBOS TO COME?
Next articleMORE INFO AND OPINION ON CAT’S CATALYST