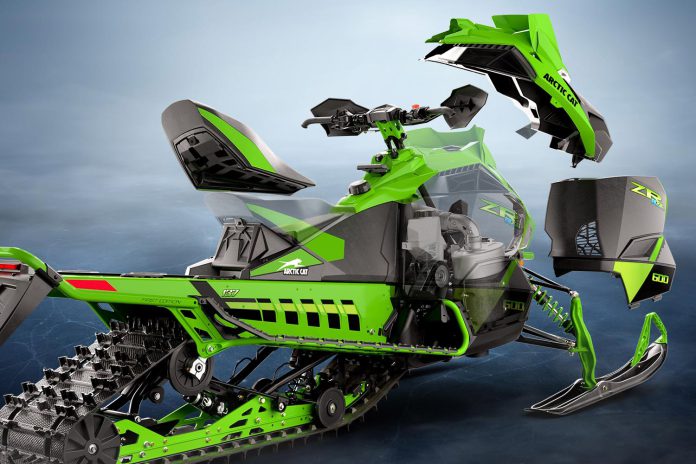 Let’s get in front of some of the more important details surrounding the Arctic Cat Catalyst platform. There’s lots new. Some things are subtle and others are revolutionary.

Just for the record (because we respect the techo-knowledge of our readers and viewers), when we say belt drive we mean the final drive from the jack shaft to the drive axle. The CVT belt is in its traditional location. The move to belt drive is smart. The entire Catalyst project had lightness as one of its foundational tenets. Ditching the chaincase, cover, chain, tensioner and other assorted fasteners, not to mention the need to dump the chain oil when changing tracks, is quite simply, a huge win. Snowmobilers will remember Polaris has used a similar belt drive on specific RMK models.

The Catalyst has gone through a major dietary process and it extended to every piece of the sled. The belt drive is a big contributor to the claimed 10-percent weight loss. Anecdotally, we suspect the 10-percent number translates to almost 50 pounds. The new one-piece front bulkhead saves weight and lowers the overall parts count.

The new composite fiber running boards are lighter than aluminum and provide improved grip. The sled’s wiring harness has been rationalized to save one pound. The overall reality of weight loss is seen in the blanket reduction of actual bodywork and chassis dimensions. The sled is simply smaller overall. The Catalyst uses substantially fewer fasteners – which one-by-one, add up to weight savings.

This feature intrigues the fertile minds here at Supertrax/SnowTrax world headquarters. The new fuel tank is shaped to reduce fuel sloshing. The idea here is that when you accelerate, a flat bottom fuel tank allows the fuel to surge to the rear and the opposite effect is true under braking. By designing the fuel tank to resist for and aft sloshing means the sled will be more stable under all riding conditions. Cool idea.

For sure, every engaged snowmobiler has heard of this fundamental chassis design principle. By moving the jackshaft, drive axle and crankshaft centerline closer to one another and, more importantly, slightly rearward, the gyroscopic effect of rotating mass from the three spinning shafts becomes more easily managed by the rider.

Also, positioning this group of parts closer together – which comprise a substantial amount of weight – the sled flies straighter, stays level and corners more predictably. The rider effectively becomes more a part of the sled. This design cue is in play in both Ski-Doo’s G-5 and the Polaris MATRYX.

Arctic Cat makes a lot of hay about this as the more snow the skid carries, the heavier it becomes is in real-world riding conditions. Truth is, this is a legit weight carving feature.

That’s a round up on the Catalyst for now. There’s still more to talk about and we’ll be doing just that in the near future.