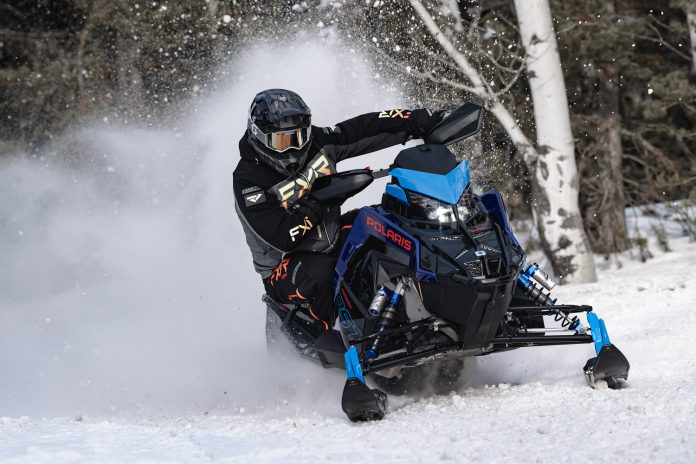 After Polaris pulled the sheets off the new S-4 4-stroke twin scheduled for service in a number of Polaris snowmobile platforms in MY 2023 we immediately loaded our next bullet.

What About Dynamix? Clearly, Polaris and Ski-Doo are in an intense season of competitive product intros. There’s little doubt Polaris has evaluated Ski-Doo’s (and Can-Am’s) Smart-Shox semi-active suspension control system.

Dynamix is fully developed and, more importantly, highly effective on numerous RZR SxS off-road models in MY 2022. Sliding the entire system including myriad sensors, electronic controls and sophisticated switchgear onto the MATRYX platform should be – mostly – a no- brainer. Okay, it does take a lot of fertile brains to develop active suspension.

Ski-Doo has had ridiculous success with its Smart-Shox option. How successful? Smart-Shox availability was sold out before Spring Break concluded last April. Truth is, if you had the opportunity to try a Smart-Shox equipped MX-Z or Renegade you were likely overwhelmed by the tangible improvement the set-up delivers.

Frankly, we think Dynamix and Smart-Shox for dirt-destined off-road vehicles is impressive but Smart-Shox on a Ski-Doo is more impressive than on a Can-Am. We would expect the same degree of effectiveness from a Dynamix system tweaked for snowmobile use.

All of this whiz-bang techno sophistication produces what we at SnowTrax and Supertrax have proclaimed is the hands down best ride quality of any snowmobile built today. Ski-Doo developed the Smart-Shox system and KYB produces it. Polaris Dynamix was developed in tandem with Fox.

With Polaris intent on continuing a market share battle with Ski-Doo, we have to think the next big thing for them is the adaptation of its SxS Dynamix suspension technology to its snowmobiles.

Mark Lester
Mark Lester is Co-Publisher of SUPERTRAX Magazine and a regular Host on SNOWTRAX TV.
Previous articleMORE INFO AND OPINION ON CAT’S CATALYST
Next articleQUÉBEC – The World’s Must-Ride Destination This Winter!