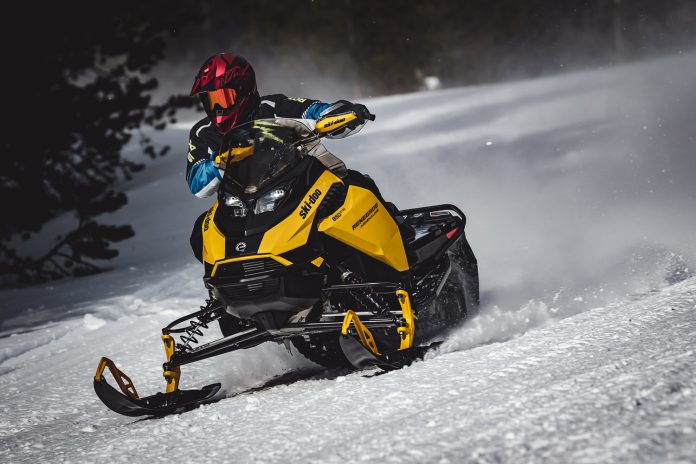 The snowmobile landscape has seen quite a shift the past two seasons to include two full-on turbocharged 2-stroke engines – one from Ski-Doo and one from Polaris. There may be something going on here.

Ski-Doo has been offering multiple 4-stroke turbo engines the past four years. These ACE 900 turbos have been delivered with 130 to 180 HP. Their acceptance in the marketplace has been overwhelming.

Arctic Cat and Yamaha have offered 4-stroke turbos since the early teens, and for the record, Arctic Cat has sold a ton of turbocharged snowmobiles going back to the mid 00s.

Polaris is last into the 4-stroke game with the new, normally aspirated S4 powerplant. The interesting issue with this engine is its mirror-like image to the 998cc Pro Star Turbo used in the crazy popular RZR off-road SxS product line up.

Let’s say it this way: Can it be much of a stretch for Polaris to turbocharge the S-4 (tonight?) and increase output to an RZR-matching 180 ponies?

With the aforementioned realities easily identified with but a glance at some of these engines, we think it’s safe to say there is strong potential for more turbocharged offerings in both 2 and 4 stroke configurations.

Most likely to appear has to be a trail version of the mighty Rotax 850 E-TEC Turbo twin presently offered in the Summit. With Polaris now offering a flatland turbo 2-stroke, the gauntlet has been thrown and we can’t imagine Ski Doo will not pick it up. Sea level horsepower would likely exceed the current Rotax ACE 900 4-stroke turbo’s output by at least 10 ponies.

We think these two engines: the Turbo 850 2-stroke from Rotax and the new S-4 4-stroke from Polaris will see turbocharging aimed at flatland trail-oriented buyers.

Clearly the Pro Star 998 Turbo in use now could be shoe-horned under the Indy Matrix hood with minimal development cost and maximum benefit.

That being said, Ski-Doo could have a 2-stroke 850 Turbo Renegade by noon tomorrow if it put its resources behind it.