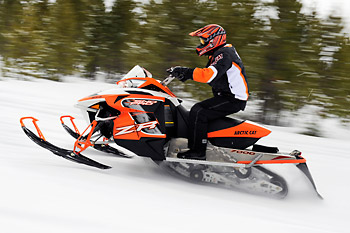 There’s no question Arctic Cat has been making solid, strategic and successful moves the past two seasons. To prove the point they’re about to bend the rules and minds of the sno-mo-industry for a third year in a row.

Enter the Yamaha/Arctic Cat engine supply relationship. Yep, check out your 2014 Arctic Cat brochure and there proudly for everyone to see is the proclamation certain 2014 models will use a Yamaha 1049cc triple for motivation.

Really, seriously? And Cat ain’t shy about it either. Frankly, why would they be? In what is sure to go down in history as a landmark homerun for Arctic Cat it somehow negotiated itself into a position where Yamaha is selling them their best 4-stroke engine – and, IMO, the best 4-stroke powerplant in the biz. Nice.

So what have we got here? Clearly, this engine loves living in the ProCross chassis. While it’s mounting and plumbing appear unusual – the exhaust makes a complete 180 under the fuel tank, turning forward to the right fender well, the shoehorning of this potent mill into the AC chassis feels about as good as any quad stroke package we’ve ridden to date.

Cat elected to use its effective and very tunable primary and secondary clutches for the Series 7000 ZR models the 1049 resides in. This is a smart move.

Arctic Cat has more tuning parts available for their clutches than Yamaha does for their clutch duo and maybe most importantly, the Cat secondary is a roller cam unit. Yamaha’s driven is not.

The sound of the new 7000 ZR when first lit is audibly pleasing. The 120-degree firing cadence of the triple is genuine gearhead music.

The exhaust header is exposed to snow from the tunnel and did not produce any noticeable heating in the right footwell.

Throttle response from first blip to full whack is exactly what you’d expect from this 130-plus-hp triple. The engine responds with 2-stroke urgency and actually feels like it has a healthy mid-range hook where the motor stands up and beats its fist on its chest.

This is a pleasing engine to ply and to prove it the 7000 ZR package was an instantaneous hit with every one of our riders.