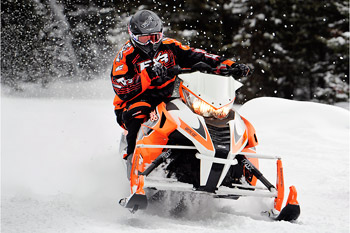 This skid gives the perfect balance of traction and mogul bridging for any trail rider disposed to occasional forays into deeper fluff.

You can still get the XF 7000 with a 144-inch skid sans torsion springs and a floating front arm, however, unless you’re riding preference is more than 50-percent off trail, go with the 137. It is exceptional.

The Yamaha triple is actually 12 pounds lighter than the 1056cc Suzuki twin and you can feel it. Turn-in is precise with just a hint of understeer that’s easily controlled with the throttle and forward weighting.

What we’re saying is this: Turn-in is not so aggressive it would upset a less experienced rider, but intuitive enough to satisfy an apex clipping, aggressive rider.

At mid-turn, the triple loves to be whacked, even with the 137-incher biting white top. The resultant instantaneous, torquey response tails out the chassis, exiting with skis planted and snow dust in the air.

Arctic Cat’s suspension calibration has taken a quantum leap in 2014 with the new 137 FFA skid. The floating front arm concept is widely accepted as the best way to eliminate vibes from trail jigglers. With the extra length of a 137 the sled literally vacuums trail trash.

Rear torsion spring calibration on the protos we rode in West Yellowstone was a real departure for Arctic Cat. Obviously someone got the memo trail riders only occasionally, not regularly, clear 100-foot doubles. Cough!

XF 7000s with the 137 track were sweet riding and will definitely get Cat back in the mainstream with trail riders who prioritize plush ride over bottoming resistance.

Here’s the secret formula. Take a legendary engine, shoehorn it into a sweet chassis, clutch it for hard acceleration and top end, stick in a smooth riding, mogul bridging skid and guess what?

You get a really good snowmobile!