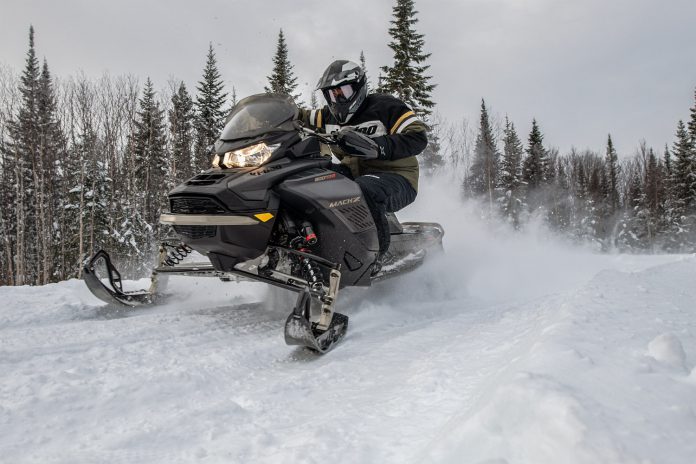 We’ve wondered for some time when fully active snowmobile suspension would arrive in the form of a consumer available option at purchase time.

The anticipation of this arrival goes back more than 10 years when the idea surfaced in the car industry and then the powersports biz about five years ago.

Just two model years ago Polaris knocked it out of the park in the off-road business with its introduction of DYNAMIX Suspension. The system uses shock shaft speed sensors, a yaw sensor and a powerful ECU to dial in damping settings on a full set of Fox shocks. The results were earth shattering!

RZR models equipped with DYNAMIX produced an incredible improvement in ride quality. You could literally hold the vehicle wide open through the craziest terrain and DYNAMIX would iron out the bumps. Sure, there are limitations to how fast you can go over rough terrain – but hear me out – the speeds DYNAMIX allows the rider to carry into gnarly terrain have not been experienced by most mainstream SxS pilots.

There’s even an “Oh no!” button on the steering wheel in the event you encounter a notorious “sucker bump”; it shifts the damping to a full stiff setting to absorb crazy craters.

When we first experienced this system on Polaris RZR SxSs we pulled aside the Polaris snowmobile brain trust and skillfully tried to get info on the possibility of adapting DYNAMIX to Polaris snowmobiles. It seemed obvious to us Polaris would bring this revolutionary tech to sleds.

As it goes, we think DYNAMIX will come to Polaris snowmobiles – and very soon. However, Ski-Doo has stolen some thunder from such an announcement by introducing its own active suspension system appropriately coined “Smart-Shox” for the 2022 model year.

Smart-Shox do pretty much the same thing to Ski-Doo’s G4 snowmobiles in both 129 and 137 inch variants as DYNAMIX does to RZR models. The system Ski-Doo uses was developed in conjunction with KYB, Ski-Doo’s shock vendor of choice. The Smart-Shox system uses five mechanically linked sensors, one on each of the four suspension systems (rear arm, front arm, right and left IFS) and a fifth on the handlebar pole under the hood.

The engine’s ECU interfaces with a separate Smart-Shox control unit to produce instantaneous damping tweaks in response to throttle inputs and the terrain you’re riding over.

Let’s look at what the advent of fully active suspension means to snowmobiling. First, the arrival of Smart-Shox elevates the riding experience to an as yet unseen level of sophistication. This is the dawning of a new day in terms of the level of comfort and resultant fun that can be experienced on a snowmobile.

Ditch bangers, lake honers and hardcore trail riders will immediately identify the improvement in ride quality over anything they’ve ridden. That’s understood. However as Smart-Shox spread in the Ski-Doo lineup there will be others who will benefit tangibly from fully active suspension. Less serious riders, older riders with health and mobility issues and smaller stature, less physical riders will appreciate Smart-Shox.

Make no mistake about it, the arrival of fully active suspension is as revolutionary as Roger Skime’s invention of the slide rail suspension debuted in the first Arctic Cat Panthers back in the late 60’s.

Think I’m nuts? I’ve ridden this new technology and can say without any qualification it is not sizzle! It is grain fed beef the likes of which we’ve never tasted! Interestingly, both Arctic Cat and Yamaha are within inches of delivering a similar fully active package. Their Fox-developed rider-on-the-fly adjustable suspension system needs only a processor (ECU) and shock speed sensors to become fully active.

For Polaris, one would assume it would be relatively easy to integrate the DYNAMIX off-road, fully active system now in use on RZR offroad vehicles.

It’s a great time to be a snowmobiler! The advancements in suspension technology available on MY 2022 snowmobiles are dramatic, paradigm shifting and are guaranteed to improve the snowmobile experience. Ultimately, fully active suspension will be quantified as value by virtually every snowmobiler – to the degree snowmobilers will line up to get a new sled with the amazing ability to read and respond to terrain.

Helmets off to Ski-Doo for being first-in with Smart-Shox!