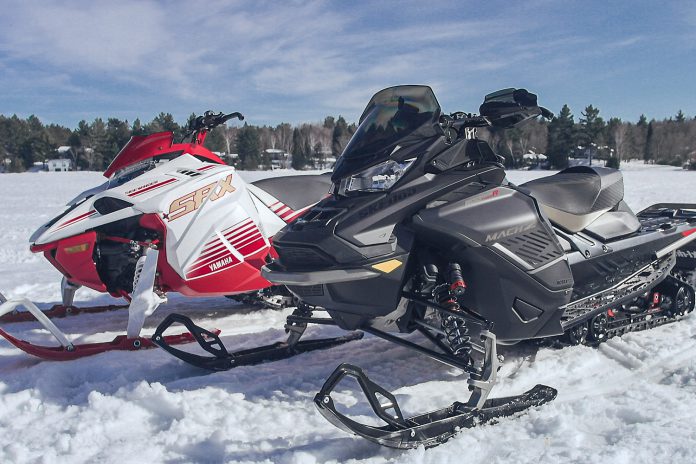 After reviewing some abrasive comments made by a few of our readers last spring regarding our inability to produce a comparison of the new Ski-Doo TurboR Mach Z and the current turbo benchmark, the Yamaha Sidewinder SRX 998 Turbo, I came to the conclusion we need to set the record straight.

We were unable to perform heads up runs on any lakes in our area. Yes, we did have the sleds together for a limited amount of time. During that time the lake was first glare ice and then transformed into a slushy mess. Just wondering as I write this and revisit comments made if you really think there’s some kind of conspiracy at play here at Supertrax/Snowtrax World HQ? For the record there isn’t. So, please know this – the heads-up running off of these two turbos is – as we promised – front and center for this winter.

Here’s some info to help set the stage for what we expect. We have a Turbo R Renegade here which is, for sake of comparison, the same sled as the Mach Z mechanically. It does not have launch control but that’s not a problem. There is no way a standing start comparo of these hugely powerful sleds will produce any meaningful results without four carbide tipped penetrators per track pitch.

Even that many studs will still tear-out on full throttle launches. We will not be able to stud these sleds, in particular, the Yamaha. In fact, our plan completely hinges on our ability to procure an SRX for evaluation this season. The supply chain issue has Yamaha committed to fulfilling all early season orders first. Press units are not in that category, and rightly so. Paying customers deserve to get their sleds first.

Here’s some more info you need to embrace. There have been mentions of “re-flashed” Mach Z’s in existence last winter which after such flashing produced Maverick Turbo HP in the 200 range. Is this true? From every source we have at Ski-Doo, this is not only untrue but impossible.

There were only a handful of Mach Z’s produced for Snow Shoot in West Yellowstone and for travelling road show use during Spring Break early order promotions. We were told sleds on the road tour were deliberately set up NOT to run. Understanding the unit we had here in Central Ontario came directly from Montana and was in need of a Smart Shock re-flash, we would not have used it for any head to head acceleration or top end comparos.

What we experienced riding both of these sleds on fast trails confirmed they are brutally fast and by our SOTP meter (Seat of the Pants) very, very close in performance. We have to ask this question: If Ski-Doo’s 900 Turbo R was not as fast the SRX in Ski-Doo’s own testing (oh, yes, they no doubt have their own Sidewinder SRX for such purposes) wouldn’t you think they (being highly competitive and possessive about their performance reputation) would have tweaked the Mach Z to run with the SRX?

I mean, this can’t possibly be a big mystery to Ski-Doo. This reality becomes clearer when you consider Yamaha has been anything but shy about nodding to a near 200 HP output of the Turbo 998. Ski-Doo knew this reality going in. So maybe the Mach Z puts out more than SD’s claimed 180 ponies? Not maybe but likely the Yamaha puts out more than its “official” claimed 180 HP.

How about this? What if the Ski-Doo does put out exactly 180 HP and the SRX does put out 10-15 more HP than the Ski-Doo? What would be your expectation then? I’ll save you the trouble. The Yamaha would be faster at the big end – for sure.

SO, WHAT’S ALL THE FUSS ABOUT?

It’s about what it’s always been about! There’s a legion of yellow under-wearing faithful who have been begging Valcourt to do another rendition of the legendary Mach Z. They will not accept anything other than number one performance down the lake. There’s also a legion of blue undie wearing fans who are confident they still own the lake and are predicting the continued superiority of the 998 Turbo Yam. It’s classic snowmobile enthusiast pride and brand loyalty.

In general, 137-inch tracks do not slow down a big inch sled when compared to a 129-inch equipped rocket. I’ll put it this way: Snowmobiles don’t know how long their track is – they simply “drive through it” laying it down as it comes off the front drive axle and picking it up at the rear tires.

As far as extra weight goes, there is only an extra four inches of track in the tunnel which has to be carried – the extra length of the rails and track on the snow is unsprung weight.

One more thing. We don’t do stud comparisons and won’t when we get these two rockets head-to-head. That’s why we do roll-ons from 30kmh (18 MPH) and 50 kmh (30 MPH). This way track spin is reduced dramatically, and results are about the sled and not the studding job. BTW, if you own one of these rockets, definitely install copious quantities of studs.

As soon as we have these two rockets on the lake with conditions conducive to running past the C-note we’ll report back to you, our valued readers and viewers.