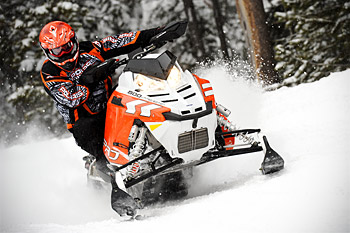 Based on sales this year and the increasing interest in crossover models, we think you’ll be seeing more sleds sold in the 128 to 136-inch track range over the next couple of years.

Apparently, according to the industry reports we’re seeing, this is already happening.

Although sales of 120 and 121-inch performance sleds are stable, there has not been an increase in volume the last two years with shorter track models.

Meanwhile, the longer-tracked Crossover market has been showing an upward curve with burgeoning sales and shoppers appear to be willing to justify the extra cost of moving to a sled with the versatility, traction and ride improvement they can get with a longer shoe.

Here’s where we think it will be going: We would not be surprised to see some big-selling models like the MX-Z and the RUSH moving to a 128-inch track in the next couple of years.

This would follow the lead of Arctic Cat which has already been using 128-inch track lengths on its ultra-performance models since 2003.

Yamaha stepped up to 128-inches on the Apex a few years ago and with big power and torque extruding through the drive systems on these sleds, more bite on the snow is a welcome improvement.

Certainly, the down side is extra weight. The truth is most performance riders would gladly give up a few pounds to get the extra traction in powder and on hard pack.

An alternative view would be for the MX-Z to switch to a 16-wide track. This would enable a lot of extra traction with probably less weight than adding a 128.

The MX-Z is already so light its actual footprint (area of track on the snow in square inches divided by weight) puts it close to some of the best crossovers on the market sporting longer tracks.