The Indy Will Be A Huge Sales Success 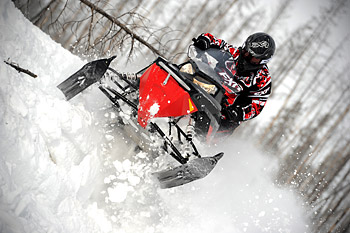 There are still tons of snowmobilers out there who remember the sales vitality the original Indy enjoyed from the late Seventies through the Gen II and Edge era.

Certainly, the intro of the IQ platform was the end of an era and the beginning of a new one for Polaris.

However, the Indy dynasty stretched for 25-plus years and grew enthusiasm in the marketplace with hundreds of thousands of riders.

The dynasty is built around more than just a name, though. From the beginning, Indys signified value, great clutching, handling and overachieving power.

Certainly, the competition has been able to respond to those benefits very successfully the last decade and Polaris may have even been guilty of straying from its original winning formula.

The point is this: The new Indy is everything the original Indy was but with significant new millennium upgrades that will make it a success in this era in the same way it was in the last.

The sled combines incredibly lightweight construction with a new generation 2-injector SDI engine along with all the incredible handling gains from its non-parallel A-arm front end perfected on the IQ and re-perfected on the RUSH.

Even its build method, using Polaris’s bonding process to match together chassis parts, is new-age, super strong and completely state-of-the-art.

With a stiffer, lighter chassis, radically updated, clean-burning engines and industry leading front end handling, the Indy is everything it was in its hay day and much more.

Even the pricing on the 2013 Indy makes it a stunning attraction. We think it may be just what the snowmobile market has been waiting for.