PREDICTIONS FOR THE 2013 SEASON 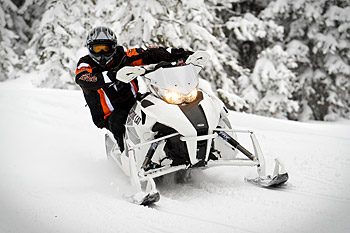 Polaris has wisely targeted this sled in the low to mid-dollar range and offers two versions: A Plain Jane base model that is really very well equipped and an SP version with upgraded shocks and graphics.

Although the Indy is only offered with one engine choice, it’s a very good one. The new liquid-cooled 2-injector SDI 600 twin is clean burning and extremely quick.

Better yet, this sled has styling cues reminiscent of the earlier trailing arm models that dominated snowmobile sales for almost two decades.

With this kind of engineering built-in and excellent pricing, we think you’ll be seeing a lot of these on the trails next year.

With rMotion being offered in more models this year and an unexplainable leaning of the marketplace toward longer tracked sleds, we think more buyers will be looking at the Renegade than even the solid selling MX-Z.

We’ve ridden the 137-inch version of the rMotion and have to confess it’s the best riding sled we’ve experienced.

The extra dollars shoppers will need to dish out for a Rennie can easily be justified with the vast versatility you get with a sled capable of honing groomed trails and running capably in powder.

The new XS bodywork available with most 2013 Renegade models is a real upgrade too, because of its improved storage and cooler styling. We’re betting this sled will be the best selling Ski-Doo next year.

After a year filled with new model glitches, Arctic Cat is determined to respond with stellar reliability and iron-clad results.

Last year, the EFI version of the 1100 4-stroke was an instant hit but struggled with faulty reverse drive problems and under-achieving top end. After talking to Cat engineers, we’re convinced the company will deliver a rock solid 4-stroke sled next year.

Except for the above mentioned issues, Cat owners we’ve talked to loved this middle ground version of the ProCross, particularly in its LXR iteration, for its responsive, smooth running and economical engine and were impressed with the sled’s balance, lightweight riding responses and good handling.

With its great looking bodywork, the fact this particular model targets such a wide audience and the assurance these sleds will be trouble-free, we think buyers will be ready to order up.