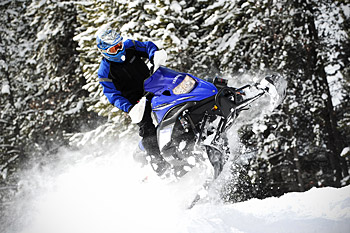 For 2013 Yamaha has placed a lot of focus on next year’s Nytro models, offering improvements in weight (about a 10-lb diet for the 2013 versions), better track selections and very effective new dual runner skis.

There’s also a ton of minor tweaks to skidframe and shock calibrations to make the Nytro more palatable to a larger audience.

Certainly, this refocusing of the Nytro by Yamaha will turn heads among the Yamaha faithful who are looking perhaps at an upgrade from a former version of the Nytro (it’s been offered since 2008). But, will it be a big enough revamp to move buyers over from other brands?

Only time will tell and in this lightweight 4-stroke segment, the Big Y faces some pretty serious competition it didn’t have gnawing at its 4-stroke dominance five model years ago.

You may have noticed at least two of Yamaha’s competitors are crowing that Yamaha is no longer the largest producer of 4-stroke snowmobiles.

Apparently, these numbers are verifiable and the intro of model selections from Ski-Doo and Cat offering turbocharged and EFI aspirated 4-strokes and even economy versions, some with all-new platforms, has put a dent in Yamaha’s former 4-stroke exclusivity.

We’ve ridden the 2013 Nytro and have to commend the engineers for a job well done in ironing out the kinks in its handling.

Its incredible 1049cc triple is still, in our opinion, one of the two finest 4-stroke snowmobile engines made (the other is the Apex’s 4-cylinder).

We think the proof will be in the riding and the Nytro will have to sell itself over the next year as consumers get a sampling and verify in their own minds whether or not it’s the right fit for them.