LOGIC BEHIND A SINGLE-CYLINDER SLED 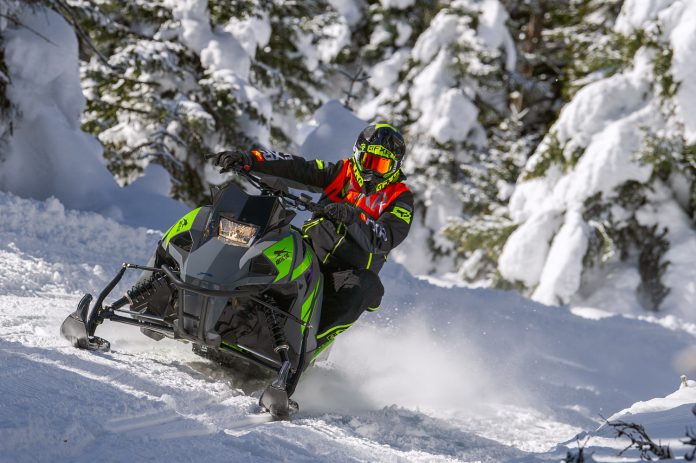 We’ve heard so many varying opinions on Arctic Cat’s decision to deliver a single cylinder BLAST this year, our collective heads are spinning!

First, let’s clarify something important: The BLAST couldn’t possibly be more aptly named. Simply stated, it’s a genuine blast to ride and our platoon of test riders last January at SNOWSHOOT in Montana, to a man, came away impressed with it. Actually more impressed than they were with some very high-end, high tech sleds they rode there.

Why? Our riders told us it was incredibly maneuverable and felt as light as a feather no matter whether it was being ridden in powder or on trails. Although a few felt it would be nicer if it was, say, 70 to 80-horsepower instead of its claimed 65, the majority felt it’s power range was perfect – especially considering the type of rider it’s targeted at.

This liquid cooled, counterbalanced, 397cc EFI 2-stroke single has machine gun throttle response and almost no vibes considering the size of its piston. Very important to its torque delivery is an electronic 3-stage exhaust valve. It also uses an electronic exhaust pipe sensor and detonation sensor to adjust timing on the fly to keep emissions low.

Power is driven through a CVTech PowerBloc primary and a matching Invance secondary – quickly becoming known as the best clutch combo for sleds in this horsepower range. What you may not know is this primary clutch design requires virtually no maintenance and is so cheap to purchase in the aftermarket, you can pretty well trash it and install a new one in five or six years – probably longer.

The BLAST also comes with electric start and reverse on most models.

We expected this engine to be hugely undersquare (piston stroke longer than bore diameter) but Cat has obviously relied on its 3-stage exhaust valve setup to keep the torque numbers high. As it is, the engine has an oversquare 85mm bore and a 70mm stroke. These dimensions are important because they mean this is a single that likes to – and can be revved.

Okay, enough about the BLAST’s tech details. What the heck made this relatively small displacement single cylinder sled so appealing to our hardcore, power obsessed riding group?

Why the interest now? After all, there have been a few (very few) single-lungers in the biz over, say, the last 20 years.

You need to go back a few decades further and realize that there was a time when single-cylinder sleds were the most common configuration in the snowmobile business. Many snowmobilers cut their teeth on this type of sled and those initial thrills have never left them.

What makes the BLAST so appealing is the fact it’s in a really good, up-to-date, full featured chassis. You can immediately tell from its looks this is a trimmed down ProCross chassis with weight taken out of the track, tunnel and skid-frame (it uses an uncoupled skid and a one inch-deep, 14-wide track and there’s no swaybar up front).

The net effect is agility and nimbleness from the driver’s seat and an engine that feels much larger than it is when you’re playing in deep snow or running trails.

If going back in time to another era is what it takes, the BLAST is a winner in every area – and especially in today’s market.

Supertrax Onlinehttps://www.supertraxmag.com
Check back frequently for new content and follow us on social media!
Previous article600 EFI, 600 ETEC or 900 ACE?
Next articleWHY IS THE NEW POLARIS 650 SO FAST?