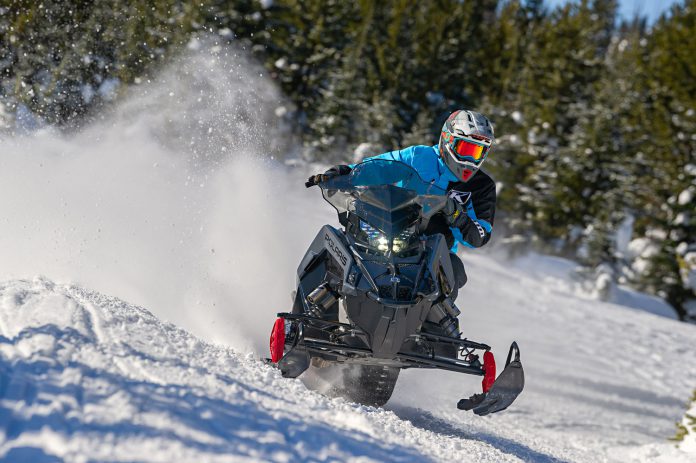 We needed to do a little research on why this engine so wildly outperforms the rock solid 599cc Polaris engine the company has used for the last decade or more. One thing to keep in mind is this new engine is all-new and Polaris didn’t just bore out the old 600 to make it a 650.

Frankly, the 650 is a clean sheet of paper. Polaris started over with a whole new design (for a 650 twin) and it shows up with the dimensions of the engine. The still-in-service 600 has a 77.25mm bore and a very short 64-mm stroke. The 600 is very oversquare by even 2-stroke standards and loves to rev but compared to the new 650, its torque numbers seem a bit anemic.

Polaris actually reduced the bore on the 650 over 3-mm to 74.8-mm (compared to the 600) but increased the stroke 10-mm to 74mm. Thus, the 650 with its longer stroke generates the level of torque you’d usually experience with a bigger displacement engine.

This further backs the Polaris claim this engine is “built on 850 architecture”. Actually, the bore/stroke dimensions on the Patriot 850 indicate an 85-mm bore by a 74-mm stroke for a total of 840ccs. The rest of the details of the 650 closely mirror the 850.

You’ll note the stroke numbers for the 650 are exactly the same on the 850… 74mm. This is no accident and it’s one reason the free-revving 650 feels much bigger than a 650. It’s square dimensions, with a fairly long stroke and almost the same bore diameter help it deliver juice in the 135-hp range.

This “long stroke” twin makes impressive torque numbers and you don’t have to ride it far to feel that torquey power delivery in the seat of your pants.

Unquestionably, Polaris has had to revise clutching and gearing to make the most of this kind of grunt in a mere “mid-size” engine. However, it really works and one ride will sell you on the difference.

A snowmobile engineer, now retired, once told us about the mystery of some 2-stroke engines. He told us “some engines simply outperform their displacement. You can work and fret over a new engine and it just won’t make the kind of power it promised from its engine size. However, another one will surprise you completely. It will outperform every competitor and if you reduce it by 50ccs or up the displacement another 50ccs, it becomes a complete dud in its category.”

Supertrax Onlinehttps://new.supertraxmag.com
Check back frequently for new content and follow us on social media!
Previous articleLOGIC BEHIND A SINGLE-CYLINDER SLED
Next articleWINTER MIGHT TASTE A LITTLE DIFFERENT