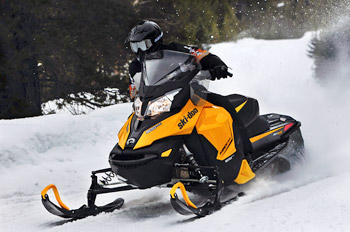 We’ve been fielding comments from our readers and viewers about the new 900 ACE triple Ski-Doo is offering this year.

We’ll fill you in on what we’re hearing but first, it’s important to understand where Ski-Doo is coming from engine-wise.

Right now, Ski-Doo is arguably delivering the most comprehensive line-up of EPA-certified snowmobile powerplants compared to all other competitors.

With two 2-strokes that are super-good on fuel and EPA-efficient (600 & 800 E-TECs), too plus three 4-strokes offering clean exhaust and good (or even incredibly good) gas mileage, it’s sometimes difficult for consumers to figure out which engine provides the best combo for their individual needs.

It’s tough to argue the 800 E-TEC at 163-hp is falling short of delivering high performance value. However, a significant throng of performance-minded Doo-ers are opting for the over-achieving 4-TEC 1200 triple that makes 130-hp and a boatload of torque. Up to triple digits, 4-TECs are fast!

Likewise, if you’re getting out your checkbook this year for a new sled and you want to cruise trails, it’s tough to decide whether the 600 E-TEC or the 900-ACE is a better fit for your riding style. Prices on these two are pretty close.

We were surprised so many Supertrax followers were so positive about the 900 ACE. We thought this performance range might be short of a bell-ringer for the snowmobiling masses.

The majority of those who reported in told us they would seriously consider this engine for their next Ski-Doo because it delivers power within a range in which they like to ride.

Most of these were from people who hadn’t had the opportunity to put many miles on one so we’ll post more responses when the snow comes and the real production ACE 900s are on the trails.

Kent Lester
Kent Lester is Co-Publisher of SUPERTRAX Magazine and a regular contributor to this website.
Previous articlePOLARIS LIGHTENS UP ITS 550 LINE-UP
Next articleWHAT KIND OF LYNX COULD COME TO NORTH AMERICA?