POLARIS LIGHTENS UP ITS 550 LINE-UP 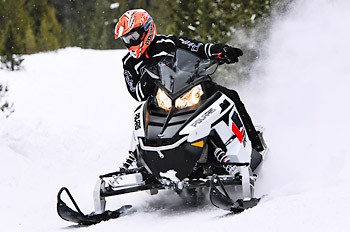 The IQ 550 fan was a credible fan cooler, however, if you could drop more than 25 pounds from a sled and get better handling, better ride and improved performance – wouldn’t you?

Polaris took its Indy 600/800 chassis, a hybrid variant of the Pro-Ride RUSH platform, and slid its reliable 550cc fan mill inside.

The new Indy chassis employs what appears to be the same 121-inch coupled, dual shock, torsion spring skidframe used in the IQ. At the front, the uber-light cast bulkhead and all associated bodywork and front suspension are RUSH.

A major change is the use of a new CVTech PowerBloc, rubber-puck-style primary clutch and a new Invance secondary.

Yes, these appear to be cost-down items but the performance here is not just good, it’s doggone impressive!

Last spring, at six thousand feet elevation, the Indy 550 would wind up to an indicated 70-per without missing a beat.

Acceleration and backshifts were strong and the light feel of the chassis was undeniably a big step up from the heavier IQ platform.

The skid is dual shock, uncoupled and provides stupid flotation for an already featherweight sled.