IS POLARIS WORKING ON A 4-STROKE? 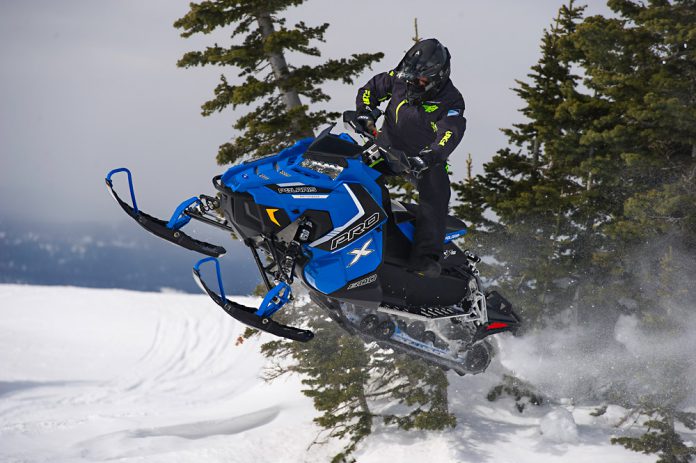 You’ve been reading our laments on how Polaris has squarely been ignoring about 25-percent of the snowmobile market by not offering anything with a 4-stroke engine.

We think the company has been too quiet and too secretive about 4-strokes and here’s why:

Polaris builds its own 4-stroke engines for the SxS biz and they are incredibly powerful, amazingly reliable and are plum dab in the correct power range to appeal to the snowmobile buyer.

First, there’s a 900cc ProStar parallel twin that has been proving itself for several years now. This is an EFI engine that is not even firing (so it has a nice exhaust note) and can make reliable horsepower anywhere from about 65 to 85 ponies, depending on cam timing.

From here, you can move up to the ProStar 1000. This is essentially the same DOHC parallel twin as the 900 but its naturally aspirated liter of displacement moves its power output up to a nice 110-hp.

Changes to its computer chip and cams could likely put it at 120-130-hp without warranty issues.

Likewise, it could be nicely detuned to about 95 horses to compete with Ski-Doo’s ACE 900, if that’s where Polaris would like to go.

Top of the list would be using the same 1000 with the turbocharger now in play on the RZR 1000 Turbo.

This version makes 144-hp in the RZR and, well, you know how it is with turbochargers. We could see this mill easily amped up to 160-hp without any issues whatsoever.

Using this ProStar engine to match the competition in the 4-stroke universe is really a no-brainer. The ProStar twin is dimensionally compatible with the new AXYS bulkhead and engine bay. The engine is light and very efficient and is versatile enough to supply horsepower in the same ballpark its other three competitors are playing in.

Best of all, Polaris knows this engine well and builds it right here in North America.

Let us know what you think about this and would you buy a Polaris 4-stroke of the ilk we’ve just described?

Kent Lester
Kent Lester is Co-Publisher of SUPERTRAX Magazine and a regular contributor to this website.
Previous articleARCTIC CAT’S DREAM RIDE CONTEST CAN BE YOUR REALITY!
Next articleDOES SKI-DOO NEED MORE POWER?