ARCTIC CAT’S DREAM RIDE CONTEST CAN BE YOUR REALITY! 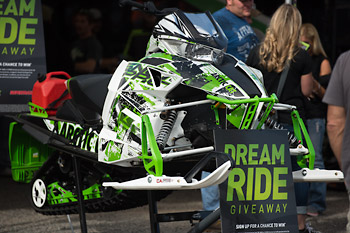 The winners of the Dream Ride contest will get their choice of either a 2015 Arctic Cat XF800 Sno Pro or an M8000 Sno Pro.

Both these snowmobiles were the subject of a crazy modification and accessorization series on SnowTrax Television last season.

SnowTrax TV’s AJ Lester equipped these two incredible snow rippers with thousands of dollars worth of Arctic Cat parts and accessories, including upgrading the M8000 to near-2016 specs with Cat’s new “boney” front spindles and a huge 3-inch lug track. You can see the sleds being massaged at snowtraxtv.com. Click on the video portal and watch each episode.

IT’S NOT JUST A DREAM SLED – IT’S A DREAM RIDE!

Winning either one of these incredible custom Arctic Cats would be a dream come true, however, the dream lives on for the two lucky winners of the Dream Ride contest!

Besides getting a new, custom sled, the winners will take an all-expense-paid snowmobile ride with some of Arctic Cat’s most famous movers and shakers and SnowTrax Television’s hosts.

The winner of the M8000 will get treated to an all-expense-paid ride with Arctic Cat’s mountain ambassadors and the SnowTrax TV team.

THIS IS MORE THAN A DREAM – IT’S DOGGONE EPIC!

Clearly this is the coolest grand prize Arctic Cat has awarded in conjunction with Supertrax and SnowTrax.

The snowmobiles are among the sweetest rides you’ve ever seen and the ride events the winners will take part in are sick!

HOW DO I ENTER?

It’s easy. Check out this issue of Supertrax International Magazine (US and Canadian Editions) and you’ll find a ballot to enter the Dream Ride. Fill it out, rip down to your local Arctic Cat store and deposit it in their ballot box.

REMEMBER: YOU CAN’T DREAM IF YOU DON’T ENTER!