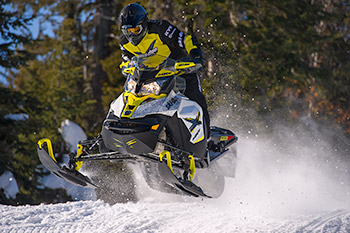 When the 2016 Ski-Doo’s were revealed last January, we heard rumblings from the press (ourselves included) that, based on what the competition is coming with, the company needs to amp up the power of its E-TEC offerings.

Not to say the 163-hp power output of the 800R is anemic. No, this is a very powerful engine and one that is downright pleasant to jam.

Is it the fastest 800 in the snowmobile business? Depends on the day you’re riding and the tune of the sleds you’re comparing it to. However, we’ve observed pretty amazing performance from Polaris’s 800HO in the AXYS and Cat’s EFI 800 is coming with a set of extremely strong performing TEAM clutches this year. Could be some challenges for the 800R in the real world this winter.

Ski-Doo’s 120-claimed-horse 600 E-TEC is one of our fave mills but it’s been playing runner-up to Cat’s slot-injected 600 for a couple of years now and last year, wrapping the super-light AXYS around the Polaris 600 jacked it’s performance up to a much higher level. Ski-Doo hates anything less than first place – and third place? Unheard of!

We think it’s time (actually MY2017 is time) for Ski-Doo to do some radical tuning-up of both its super-clean, super-lean E-TECs and redeem its position as not only the market leader, but the performance leader, too.

Tell us if you think Ski-Doo needs more 2-stroke power.