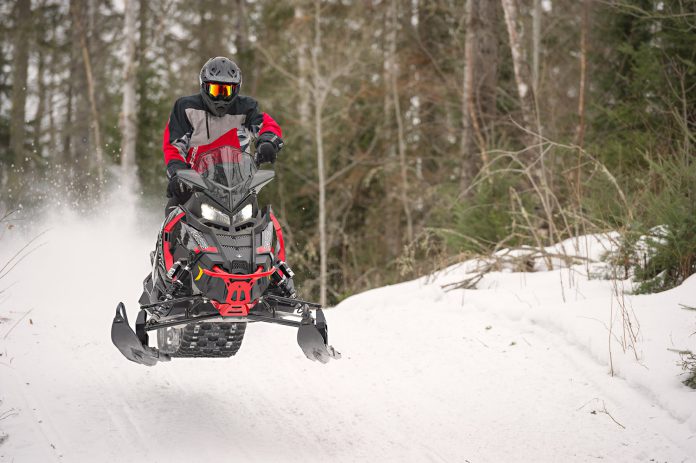 Polaris saw the writing on the wall with Ski-Doo’s 850 E-TEC being such a big hit when it was introduced.

Although Polaris’ Liberty 800 was and still is a formidable powerhouse, from a marketing perspective it just flat-out wasn’t an 850.

Enter the Polaris Patriot 850. This big-inch Cleanfire Semi-Direct injected 2-stroke addresses the wants of the marketplace with increased power and torque and all the sizzle ownership of “King of The Hill” status can bring.

Obviously, Polaris knew what it had to deliver with the Patriot 850. While Ski-Doo was enjoying sales success with their new engine, Polaris had a distinct advantage bringing the Patriot to market.

They began developing their 850 before they introduced the Liberty 800 in 2015 and long before anyone saw the Rotax 850! Important issues like NVH and ensuring belt durability with the Patriot’s huge power had time to be thoroughly tested and fully vetted.

The bullet is in the chamber and Polaris has the 850 Rotax in their cross hairs. Get ready – it’s time for you to pull the trigger.

Producing power wasn’t Polaris’ first concern: This engine had to be as reliable as a Supreme Court judge and live a long, trouble-free life for its owners.

Thus, all 2019 Polaris snowmobiles powered by an 850 Patriot come with a transferable 4-year engine warranty. That level of confidence in an engine looks to us like long-term value. However, in order to give consumers this kind of coverage there had to be some differences.

Polaris started at the bottom end with humongous crank bearings and a beefier crankshaft. The crank bearings measure 40 x 80mms compared to the 800’s 35 x 72mm!

Power transfers into the primary clutch via an enlarged taper where a much larger drive belt, distinct to the 850, lies. Belt life is a big deal and something Ski-Doo has struggled with. Polaris engineers have expressed a high level of confidence in both belt durability and clutch performance.

A lot of this confidence comes from new engine mounts that do an incredible job of cancelling vibrations throughout the chassis without the use of a torque stop.

Externally, the 850 is surprisingly compact and despite all of its strength-enhancing architecture only weighs 6.5-lbs more than the Liberty 800. Huge 50mm throttle bodies are used and the claimed uptick in horsepower (over the 800 Liberty) is rated between 7 and 9-percent with a noticeable increase in torque.

Our early appraisal says this engine impresses with its incredible smoothness, kick-in-the-butt bottom end and its ability to pull tall gearing because of its ample power.

Is it faster than an 850 E-TEC? We’ll let you know as soon as the snow flies.